Yuko Ozawa (, Ozawa Yūko?) is a character in Jujutsu Kaisen. She was a classmate of Yuji Itadori in their Junior High School.

During her Junior High School years she was a bit overweight with black hair that reached to the chin. Yuko wore a dark colored sailor uniform, with light colored socks peeking over her light colored shoes with dark tips. 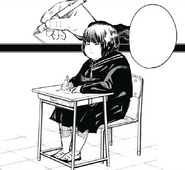 Yuko appears to be a timid girl who had a crush on Yuji. After meeting Yuji again and having a chat with him, she decided not to reveal her feelings.

At some point, Yuko overheard a conversation where Yuji stated that he liked Yuko, along with his explanation as for why he did like her. Hearing this, Yuko started to like Yuji back.[1]

Six months ago, Yuko mustered up the courage to ask Yuji for a photo together on graduation day. Afterwards, Yuko had moved to Tokyo, growing 15 centimeters as well as losing some weight due to the stress of moving.[2]

Yuko happens to come across Nobara and Yuji. After Yuji leaves, Yuko comes up to Nobara and asks if she was with Yuji earlier. The two then head to a restaurant, where Yuko explains to Nobara how she liked, and still likes, Yuji. Nobara decides to calls Megumi since he knows more about Yuji then she does. Yuko wonders if Nobara also likes Yuji, though Nobara responded with a no.

When Megumi shows up, Nobara explains Yuko's circumstance to Megumi and asks if Yuji has a girlfriend. Megumi says that he doesn't believe Yuji has a girlfriend, and explains why he thinks that. Yuko then asks if Megumi knows what type of girl Yuji likes, which Megumi tells her that he believe that Yuji had said that he liked tall girls. Yuko and Nobara are glad about this news, which Nobara texts Yuji to come to the restaurant. When Yuji shows up, Nobara becomes worried that Yuji won't recognize Yuko. Contrary to this belief though, Yuji easily recognizes her. After meeting for a while, Yuko decides to not reveal her feelings after realizing she doesn't want to get him to like her based on her new looks, as someone she hates might do. She leaves but not before giving her contact information to Nobara.[3]

As an ordinary human, Yuko doesn't possess any additional abilities.