Yuji Itadori (, Itadori Yūji?) is the main protagonist of Jujutsu Kaisen. He is a first-year at Tokyo Metropolitan Curse Technical College.

Yuji is a young man of average height and appears to have a slender build when wearing baggy clothing, but actually has a lean and muscular physique. He also has quite large light, brown eyes and with pink spiky hair that's styled in an undercut fashion. When becoming the vessel for Sukuna after eating his finger, he gains a second pair of eyes that only open when Sukuna controls the body along with his many tattoos.

At the start of the series, Yuji wore a light-colored hooded jacket, high-cuffed black pants, and white shoes. However in the anime his pants were denim and his shoes were bright red. When Yuji enrolled into the Tokyo Metropolitan Curse Technical College, he began wearing his version of the uniform; a black long sleeve shirt resembling a gakuran over a red hoodie, black pants, and red shoes.

During the Shibuya Incident, he gains a noticeable scar between his two eyes and a smaller scar on the left side of his upper lip. 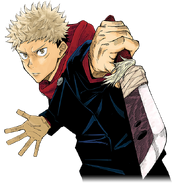 Yuji's initial appearance in the manga.

Yuji is a fair person who cares greatly for not only his comrades, but anyone he views as people with their own wills, despite how deep or shallow his connection to them is. He cares greatly for the "value of a life" and to this end he will ensure that others receive a "fair death."

Although normally composed, good natured and friendly, Yuji can be angered very quickly in the face of pure malice, after witnessing first hand the cruelty which curses were capable of, in particular Mahito's inhuman exploitation and discarding of Junpei, Yuji felt so profoundly disgusted that he felt for the first time in his life a genuine desire to kill.

One of Yuji's defining traits is his willingness to sacrifice himself for others, triggered by his grandfather's last words to him to die surrounded by others. When he and Megumi were under the threat of being killed by a curse, Yuji impulsively swallowed Sukuna's finger in order to exorcise the curse and save them despite meeting Megumi for the first time.

Overall Skill Level: Yuji is famous for his superhuman physical abilities, earning him the nickname, "The Tiger of West Junior High" before becoming a Sorcerer. As a vessel, he has the exceedingly rare ability to contain Sukuna's soul without any ill effects. This natural skill allows him to 'perceive the contours of the soul' and lets him harm Mahito.

Superhuman Strength: He is able to destroy walls with ease and can throw a lead ball with enough force to bend a soccer goalpost. Yuji has also been able to throw a car. Yuji's striking strength has also been compared to Kento Nanami, a Grade 1 Sorcerer.

Enhanced Durability: Yuji's durability surpasses the average sorcerer - he was still able to fight the special-class curse after being blown through a wall losing a hand and multiple fingers.

Enhanced Speed and Reflexes: He can finish a 50-meter track within 3 seconds. When students from Kyoto School tried to murder him, he was able to dodge the attacks of all five opposing sorcerers. Recently, he displayed enough speed to evade Choso's Piercing Blood which travels at the speed of sound.

Enhanced Stamina: Fitting his other superhuman capabilities, Yuji possesses a large amount of stamina and has been shown continuing to fight injuries such as a severed hand and fingers and multiple stab wounds.

Proficient Learner: Yuji is a curious person, tending to ask many questions to his instructor. He is also good at progressing - being quick at Satoru's Movie Appreciation Training, and realize Aoi Todo's guide quickly. According to Akutami, he is best at cooking among the trio of the First Years. Yuji has shown that he can easily master a weapon with a short amount of time.

Proficient Hand-to-Hand Combatant: Yuji is a skilled combatant that can make quick judgments and power blows. Yuji can make refined attack, like stopping his attack just before it hit and adjust his power within his fist. Yuji is also skilled in a martial arts style, Taido Martial Arts.

He is capable of performing a Knee Release. Which is an ancient martial arts technique that eliminates starting movements. Yuji is not only able to release his knees, but also his hips and shoulders, to instead of falling down, is able to guide himself to his opponent's feet.

By combining the aforementioned technique with Taido Martial Arts, Yuji can perform a Manji Kick, where uses the momentum to throw his right leg upwards and land a kick to his opponent's head. By adding cursed energy to this attack, it is able to harm cursed spirits.

Poison Resistance: Since Yuji is the host to Sukuna, he has a resistance to all kind of poisons. Yuji will feel the pain from the poison, but he is largely unaffected. This ability was first demonstrated during his fight with Junpei, when he could resist the poison from Moon Dregs.

Weapon Mastery: Yuji was not trained in the use of weapons, however, due to his physical power and intelligence, he can still master one quickly.

Yuji's only known relative. Yuji deeply cares for his grandfather, visiting him and calling the hospital to ask how his grandfather was before his death. His grandfather's final words about death had a huge impact on him and his attitude towards the world of jujutsu and curses.

Retrieved from "https://jujutsu-kaisen.fandom.com/wiki/Yuji_Itadori?oldid=21833"
Community content is available under CC-BY-SA unless otherwise noted.