Toshihisa Negi (, Negi Toshihisa?)[1] is a recurring character in the Jujutsu Kaisen series and its prequel Jujutsu Kaisen 0: Jujutsu High. He is a curse user who used to be a commander in Suguru Geto's "family" of sorcerers. After Suguru's death, Negi and Manami Suda both decided to carry on his will by joining the entity to who stole his body.

Negi is a muscular young man with a thin frame. He has mid-length, disheveled black hair and sharp eyes.

In 2017, Negi had a large scar going down the right side of his face. He wore a headband with parallel line decals and his hair was spiky. He sported a black long-sleeve shirt and matching pants with light-colored dress boots.

As of a year later, Negi covers his right eye completely using a piece of his headband cloth, which is a different headband from the one he used to wear. His hair is much more relaxed compared and he wears a skin-tight black bodysuit underneath a light-colored monk's robe that mainly drapes over his left side. 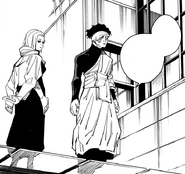 Negi standing with Manami in 2018.

Little is known about Negi, but he clearly shares Suguru Geto's vision to eradicate non-sorcerers. He refers to normal humans as monkeys and wants them all to suffer so the strong will thrive while curses fade from existence for good. He would prefer not to kill jujutsu sorcerers in battle but will attack if necessary.

Unlike Mimiko and Nanako, Negi and Manami were willing to allow Pseudo-Geto to exist in order to keep carrying on Suguru's legacy. The Hasaba sisters believe the imposter should die for defiling their master's body, but Negi believes his body is no concern of theirs. Negi only wishes to create the world Suguru envisioned and believes that's what it means to inherit his will.[2]

Toshihisa Negi was among Suguru Geto's commanders when they were summoned to his headquarters to discuss destroying Jujutsu High.[3]

Overall Skill: Toshihisa Negi's abilities as a sorcerer are completely unknown. As one of Suguru Geto's former commanders, it can be safely assumed he's a capable fighter and was heavily involved in the Night Parade of a Hundred Demons in Kyoto. He was confident enough in his abilities to take on grade 1 jujutsu sorcerer; Atsuya Kusakabe. However, Kusakabe wasn't the least bit intimidated by Negi in comparison to the special grades lurking in Shibuya.[4]