Tokyo Jujutsu High serves not only as a training ground for the next generation of sorcerers but a headquarters for all alumni who have graduated on to be full-fledged jujutsu sorcerers as well. All sorcerers play a role in mentoring jujutsu students, whether in a teacher's role or accompanying them on missions. Weaker sorcerers are assigned the roles of windows, someone who can see curses but is not considered a full-fledged sorcerer or managers to contribute as well.

The jujutsu schools are considered the place for the community and provide mediation, general support, education, and shelter.[1]

Tokyo Jujutsu High is a broad campus of several buildings build in a traditional Japanese architectural style, operating under the guise of a Buddhist temple. The school building is well hidden on Tokyo's outskirts, far and high in the mountains. Naturally, there are a lot of trees around the property to further obscure the location.[2] Some elements other than the buildings reflect the Buddhist theme. There are several statues of deities, shrines, and torii gates around the campus.

There are several entrances into the school. The entire property is hidden by a protective barrier maintained by Master Tengen, who lives beneath the school in the star's underground tombs.[3] The school grounds include training grounds, courtyards, dormitories, and classrooms, among a variety of other amenities.

The landscape of the school grounds.

The members of authority at Jujutsu High are known as the "higher-ups". The higher-ups control the majority of decisions revolving around the school. They hold their meetings in a dimly lit room with a single light that illuminates whoever is speaking to the board. The higher-ups' bodies are hidden from view using doors that stand on their own. Their members consists of older men like Kyoto Principal, Yoshinobu Gakuganji.[4][5]

They are conservative traditionalists that often clash with those that have progressive ambition like Satoru Gojo.[6][7] Many of the politics involved with governing the jujutsu community effects the school and its students. Both Yuta Okkotsu and Yuji Itadori were isolated on campus in sealed rooms and initially scheduled for execution. Even after being vouched for by Satoru Gojo, both students, who enrolled at two different times, have only had their executions suspended since.[8][9]

Upon enrolling in Jujutsu High, transfer students are taught about the school's rules and security measures. The school is protected by Master Tengen's barrier, which hides its location from the outside world. Those who already know the location can easily find it. One entrance is in the foothills of Mount Mushiro up a long set of stairs marked with a series of torii gates.[10]

The school's curriculum is taught over four years.[13] The concept is to train young sorcerers to control their curses and use them to exorcise other curses. All classes appear to be taught by active professional jujutsu sorcerers. The teachers regulate their students' training regiments and education as they see fit. Sorcerers are rare, so classes are often small and focused on building up the individual students into competent sorcerers as quickly as possible.

Students are given a formal education with standard school classes such as homeroom and sorcerer training through practical jujutsu classes.[14] They move from their original homes to live on campus in the dormitories. The majority of training, classes, and school events are all conducted on campus grounds.

Practical training assignments and field tests often consist of investigating paranormal locations and exorcising weaker curses.[15][16] Jujutsu High students are ranked on the same scale as professional jujutsu sorcerers, which their student ID reflects.[17] Same as jujutsu sorcerers, students are given missions according to their ranking.[18] When leaving school grounds to exorcise curses as a part of their training to gain experience, students are often supervised by a sorcerer or manager.[19]

The male school uniform consists of asymmetrical blue jackets with high collars and two pins on the left side engraved with the school logo. The male uniform is completed with a pair of matching blue slacks. The standard female uniform has the same top with a skirt for a bottom.

The uniforms are highly customizable, and many of the students have their own variations of the uniform. The top half of Nobara's uniform is similar to a traditional gakuran uniform, with buttons from top to bottom down the middle. Yuta's uniform is all white, and Yuji's uniform is customized with a hood as one of many possible examples.

Jujutsu High has summer and winter uniforms like most Japanese schools. There usually isn't much difference between them other than breathability because the uniforms must remain practical for combat. If a student desires a custom uniform, they can put in a request with the school.[20] 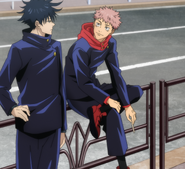 Megumi's standard uniform and Yuji's uniform customized with a hood. 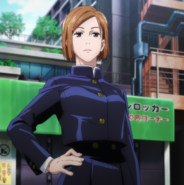 Kyoto Sister-School Goodwill Event: Tokyo and Kyoto students participate in a joint annual competition to promote goodwill between the sister schools.[21] The competition takes place on the campus of the previous year's winner. The principals of both schools decide on two competitions for the students centered around jujutsu battles. Traditionally there is always a team competition and an individual competition.[22]

Tombs of the Star