New Shadow Style: Simple Domain (シン・「」, Shin Kageryū: Kan'i Ryōiki?) is an anti-domain technique that erects a small barrier around the user to protect them from the effects of a Domain Expansion.

During the height of jujutsu in the Heian Era, Sadatsuna Ashiya created the "domain for the weak" in order to protect his followers from evil curses and curse users.

Simple Domain can also be used offensively. There are also several swordsmanship techniques within the New Shadow Style that operate around countering anyone who enters the range of the user's Simple Domain.[3]

Simple Domain was originally meant to be passed down through the Ashiya's family and was forbidden to spread to outsiders. However, in the modern age, several sorcerers with no relation possess the ability to use Simple Domain. Kasumi Miwa was taught by her mentor in Junior High[4] and Aoi Todo, who doesn't come from a Sorcerer Family, learned from Yuki Tsukumo.[5]

Kasumi Miwa's Simple Domain creates a barrier beneath her feet that spans a 2.21-meter radius. Anyone who enters her domain will be intercepted automatically by her Batto Sword Drawing technique. If both feet leave their original position from when the domain was cast, Kasumi's technique ends. It is her main form of combat and was first showcased this ability during the Goodwill Event.

Yuji Itadori stumbled into Kasumi's domain when the Kyoto Team attacked him. However, Yuji's advanced speed allowed him to completely avoid Kasumi's automatic counter. She also used Simple Domain in her jujutsu battle with Maki Zenin, but it was once again countered by superior speed and athleticism.[6]

Kokichi Muta was unable to cast Simple Domain himself but he was able to imbue the technique into mechanical tubes. Using the Technique Charge function of Ultimate Mechamaru Mode: Absolute, Kokichi could use his giant armored puppet to cast the technique.

Mechamaru was able to shift the fingers on its right hand into gun barrels or spikes capable of injecting Simple Domain's effect into Kokichi's target. In Mahito's case, being hit with a projectile containing Simple Domain affected his soul because it neutralized his Idle Transfiguration technique upon detonation. Kokichi was also able to use it to protect the cockpit from Mahito's Self-Embodiment of Perfection.[7] 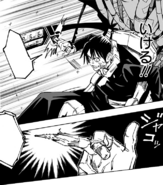 Ui Ui accompanies Mei Mei in battle because he's responsible for countering domains. He's capable of activating Simple Domain and neutralizing any cursed techniques as long as Mei Mei gives him permission. He did so to counter the Smallpox Deity's Domain Expansion after getting trapped in a coffin. Simple Domain nullified the disease curse's ability to bury the coffin underground with a gravestone, a technique Ui Ui would not have survived.[8] 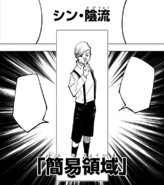 Ui Ui using Simple Domain to protect himself from a Domain Expansion.

Atsuya Kusakabe is an elite-level user of the New Shadow Style. He reached the rank of grade 1 despite not having an innate technique thanks to his proficiency in utilizing Simple Domain. He can use the New Shadow Style swordsmanship techniques to cut down his enemies using different sword-drawing type attacks.

Kusakabe is also capable of using Simple Domain's ability to effectively cancel out other cursed techniques. He blocked Psuedo-Geto's Maximum: Uzumaki to protect his allies, prompting the immensely strong curse user to admit Kusakabe possessed quite a high degree of skill. 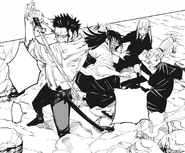 Kusakabe after protecting the girls from Maximum: Uzumaki.

Aoi Todo learned to use Simple Domain from his mentor, Yuki Tsukumo. He attempted to use it to nullify the effects of Mahito's Self-Embodiment of Perfection. However, the domain was only deployed for 0.2 seconds, slightly too fast for Aoi to counter.[9] 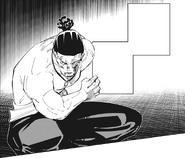