Saori (, Saori?) was a good friend of Nobara Kugisaki, before she left her village.

Saori was a young girl with long brown hair with bangs and brown eyes. She wore a white turtleneck sweater, beige skirt with white socks and black shoes. Nobara stated she looked like a doll. As an adult, her hair is shorter, reaching her shoulders. 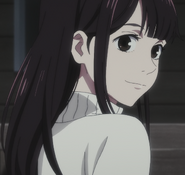 Saori as a teenager.

According to Nobara she was kind as a nun. As an adult she appeared to be hard-working, working on her project to get in finished soon even at midnight. She mentioned she tried very hard to impress Nobara and Fumi and worries they will be disappointed by seeing her as a boring person.

Saori came from Tokyo to a village with her family, when she was in her second year in middle school. There she met Nobara and became good friends. However the village ostracized the family, claiming they think lowly of the villagers. They made her out to be a bad person, which drove the family out of the village, saddening Nobara.[2]

While at work, one of Saori's coworkers asks her about taking a break. Saori tells her coworker that she can't because proofs are due today. Her coworker mentions the incidents in Shibuya and wonders if it's a terrorist attack. Saori thinks to herself about how her coworker is crazy. Just then, her coworker suddenly asks if Saori wants to get married which surprises her. When Saori asks why her coworker asked this question, they tell her that they thought things would be different for themselves. Saori reveals her history to her coworker and says that she moved when she was a second-year in junior high. She adds on that the reason behind why she moved was that her mother was into organic stuff and spirituality. Her coworker asks if it's because of family work which Saori refutes.[3]

Saori tells them that she met two girls there who were seven years younger than herself, one of them was called Nobara, who took a liking towards her. She tells them that she was an only child and that Nobara was just too cute. Saori happily tells her coworker that she once made black tea for them to impress them. She adds that she didn't exchange contact information with either of the girls and says that she was afraid of losing contact with them. Saori talks about the tears shed when they said goodbye and says that the two would probably be disappointed in her for being such a boring person she is today before wondering how Nobara is doing.[4]

As an ordinary human, Saori doesn't posses any additional abilities.