Ryu Ishigori (, Ishigōri Ryū?) is a character in the Jujutsu Kaisen series. He is a jujutsu sorcerer from the past who was incarnated by Kenjaku to participate in the Culling Game as a player.

After incarnating into the modern era, Ryu has the appearance of a handsome young man who is relatively tall with a muscular body. He has a well-defined jawline, sleek cheekbones, soft eyes, and thin eyebrows. Ryu has black hair and proudly sports a vintage pompadour hairstyle directly connected to his cursed technique.

He wears a dark jacket with extensive fur trim around the neck and wrists. The coat is left open, revealing Ryu's chest and the necklace he wears. He has a belt with a large buckle tied around the waist of his dark pants and sports similar colored shoes. 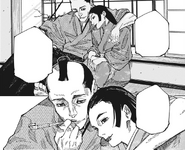 Ryu is a classic hotshot that both men and women admire. In his past life, he enjoyed both a good fight and the company of ladies. Even though Ryu has no regrets, he likens his previous life to a "moderate eater" with no "dessert" to satisfy him. Ryu intends to use his second life to seek a worthy opponent to fulfill his insatiable hunger.[1] Despite his persistent desire for combat, he appears calm and rational. Yuta further speculates that his point score in the Culling Game is a result of Ryu's choice not to target ordinary citizens but also his indifference to their deaths due to collateral damage in his fights.[2]

Yuta Okkotsu potentially possesses the ability to fulfill Ryu. He attacked Yuta in search of that satisfaction but their battle royal with Takako Uro put the Jujutsu High sorcerer at a disadvantage. Ryu was disappointed with Yuta and compared that feeling to seeing a delicious cake shop with empty display windows close at the end of the day.[3]

400 years ago while living in Michinoku, the Date Providence of Japan, Ryu Ishigori gained some notoriety by having the highest cursed energy output ever recorded. These rumours interested Kenjaku but an elderly Hajime Kashimo remained sceptical.

By November 12th, 2018, Ryu had managed to gain 77 points in the Sendai Colony. His high cursed energy output made him one of four players locked in a tense deadlock. One of the four, the incarnated Dhruv Lakdawalla, is killed by Yuta Okkotsu. Ryu realises that his success in sneaking toward Dhrub was due to Yuta drawing attention and that the Kurourushi will strike now that the stalemate is broken. Ryu simply observes the battle between the newcomer and the cockroach curse once it appears. Yuta attempts to exorcise Kurourushi without revealing that he is capable of using Reverse Cursed Technique. Still, Ryu manages to see through his tricks and notices Okkotsu's incredible amounts of cursed energy.

Takako Uro manages to ambush Yuta. Ryu's impatience drives him to open fire with Granite Blast, alerting the other two players to his location and forcing Yuta to consider Ryu his top priority. Ryu is ecstatic when Yuta charges at him and is amazed when the youngster avoids his attacks and turns the fight into a brawl. As their battle intensifies, he begins to consider Yuta's extraordinary skills and concludes that he may be able to fulfill his unsettled desire. Ryu unleashes an energy blast as Uro emerges to attack Yuta, only to be surprised when she uses her Cursed Technique to reflect the blow back at him. Ryu becomes disappointed at Yuta's apparently limited potential until the surprising arrival of Rika, Yuta's partner. While Yuta fights Uro, his summoned ally battles Ryu, deflecting his attacks and launching him over the rooftops. When Yuta and Uro arrive in the same area as Ryu they immediately unleash their own Domain Expansion in response to his.

While Uro and Ryu's individual strategies to separate Yuta from Rika by trapping him in a Domain are successful, the shocking intervention of a reborn Kurourushi causes the collapse of all three domain barriers. This leaves Uro and Yuta temporarily unable to use their techniques to their fullest capacity while Ryu can exert the same amount of energy as usual. He blasts Uro, previously injured by Kurourushi, into unconsciousness with a single blow. Yuta eliminates the Cursed Spirit before re-approaching Ryu. The remaining combatants then initiate an exchange of energy blasts. While Yuta initially loses the advantage during their beam clash, he quickly turns the tide by having Rika provide covering fire while he moves in closer. When Ryu fires a Granite Blast at close range, Yuta redirects it into the air using Uro's copied technique. As soon as Rika reaches its time limit and vanishes, the remaining two combatants engage in a brutal close-quarters battle. Ryu is ultimately defeated after taking a full blow from his previously deflected Granite Blast.

Satisfied for the first time in his life, Ryu has no issue losing to Yuta but chastises him for sparing him and Uro. Ryu immediately agrees to transfer his points to Yuta using the newly established 10th Rule. Before Yuta leaves Ryu doubts his mercy, wonder if the Special Grade would have killed them both if this new ruling didn't allow him to build points more quickly by sparing others.

Overall Skill Level: Ryu is a sorcerer that boasts destructive power and the highest cursed energy output of any player in the Culling Game. He was able to score seventy-seven points in twelve days in one of the game's fiercest colonies and forced a deadlock with other exceptional players like Dhruv, Kurourushi, and Uro.[4]

The ability to fire cursed energy like a cannon grants Ryu massive destructive potential. He is also a highly talented fighter who can fight close-quarter or at a distance while always using his explosive energy output.[5] He could contend with Yuta and even caught him off guard by discharging cursed energy in clever ways.[6]