Rika Orimoto (, Orimoto Rika?) is a character in the Jujutsu Kaisen 0: Jujutsu High prequel series. She is the childhood friend of Yuta Okkotsu who tragically died when she was hit by a car. Her spirit was cursed, transforming her into a powerful special grade vengeful cursed spirit worthy of the moniker "Queen of Curses" (いの, Noroi no Joō?). Rika spent years haunting Yuta as a curse until he attended Tokyo Jujutsu High where he learned to unravel the curse on Rika's spirit, finally allowing her to pass on to the afterlife.

Rika was a young human girl with a small fragile frame, long black hair that reached her shoulders, soft eyes, and peach-colored skin. She wore a sleeves black dress with a white collar decorated with hearts and black shoes.

Rika's appearance as a vengeful curse was completely different. She was a larger monstrous curse with a large muscular upper body, long arms, and a tail-like shadow that served as her lower body. She had a single cycloptic eye that was normally hidden behind a shell that looks similar to a brain. Extending from her head were several tendrils, and she had long untrimmed fingernails as well as a mouth full of thin sharp teeth. 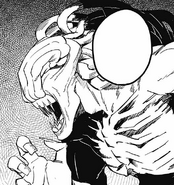 Rika was an innocent young girl and childhood friend of Yuta. She shared a special connection with Yuta and believed that she loved him. These continued on even after death. As a vengeful spirit, Rika desired only to protect Yuta, but her great power often caused her to harm others in the process. While she had curse-like instincts to attack anything that was a threat, Rika still listened to Yuta and restrained herself because of her love for him.

After being freed from her curse, Rika was still able to forgive Yuta and leave him behind despite his promise to pass on with her. Before leaving, Rika even told Yuta that she was happier spending time with him as a curse than when she was alive.

In 2010, Rika is in a park with Yuta when she gives him a birthday gift. The gift is a ring and the two promise to marry each other when they grow up. When they leave the park, Rika is killed in a car accident. Yuta then curses Rika, and caused her to be attached to him.

In November of 2016, Rika had stuffed four students in a locker that were bullying Yuta. After this event, Yuta was taken to Tokyo Jujutsu High. During his isolating, Yuta tried to kill himself but Rika got in the way and saved him. It was during this time that it was decided that Yuta would enroll into the college in order to exorcise Rika one day. When Yuta met his fellow classmates, they notice Rika and confront him. Rika shows up and forces the three to back away from Yuta. Once the three settle down, Gojo explains the situation that is happening with Yuta.

Yuta is then given a mission with Maki, where they have to exorcise a spirit that had kidnapped some kids at a school. When Yuta and Maki are swallowed by the spirit that had kidnapped the children, Yuta summons Rika to exorcise the spirit while Yuta brings Maki and the children to safety. After this mission is completed, Gojo informs his superiors of what they know about Rika.

Days later, Yuta is sent on a mission with Toge and told to not let Rika out during the mission. During the mission, a powerful spirit appears and becomes concerned when it senses Rika.

On December 24, Geto comes to the college in order to kill Yuta and add Rika to his collection. When Yuta finds out that Geto has harmed his friends, Yuta fully summons Rika. Yuta and Rika then fight against Geto and all the cursed spirits that he has collected. While fighting, Rika manages to collect all of Yuta's friends and the two get them to a safe location. As Yuta starts to heal his friends, Rika get jealous of Maki and grabs her. Yuta tells her to let Maki go, which Rika releases Maki and apologizes for what she has done. Yuta then points out that Geto is their enemy, which Rika says that she hated Geto too.

Rika and Geto then continue their fight with Geto, which Yuta uses Rika's power to easily destroy Geto's cursed spirits. Geto manages to figure what Rika's abilities are and desires Rika even more. Rika and Geto then went in a close combat fight, which Geto manages to overwhelm Yuta. Rika sees that Yuta is being overwhelmed and quickly brings Yuta away from Geto. Yuta manages to get used to Geto fighting style, Yuta manages to push Geto into a corner. When Geto decides to throw all his spirits at Yuta, Yuta brings to thank Rika for always helping him. Rika then gets excited when Yuta kisses her, which Geto notices that Yuta is planning to sacrifice himself to remove the limits on Rika. Rika then fires a blast, that manages to defeat Geto and his spirits.

When Yuta falls unconscious, Rika waits until Yuta wakes up. Maki, Toge, and Panda show up when Yuta wakes up. Yuta informs that in order to defeat Geto, he had to sacrifice himself to release Rika's powers. As Yuta prepares to join Rika, Rika suddenly returns to her appearance when she was still alive. As they are all confused by this, Gojo shows up and informs them that Rika's curse has now dispelled. Gojo explains how it was Yuta that had cursed Rika when she died, because he could not accept her death. As Yuta starts to blame himself for everyone that was hurt by Rika, she hugs Yuta and explains how she was truly happy being by Yuta's side for the past 6 years. Rika then bids Yuta goodbye and disappears.

Overall Skill: As a special grade vengeful cursed spirit, Rika's power was unmatched. Fully manifesting Rika was considered a grave threat by the jujutsu higher-ups. By only manifesting her arms she could easily bring harm to non-sorcerers and jujutsu sorcerers alike. Once Yuta trusted his connection with her enough to allow her to fully manifest, Rika power eclipsed that of nearly all other curses.

Suguru Geto, a curse manipulator with well over four thousand cursed spirits in his possession believes that Rika is without a doubt the undisputed Queen of Curses. He risked everything to gain her power and had he been successful, Geto expected to have exactly what he needed to destroy all non-sorcerers.[1]

With Rika's aid, Yuta Okkotsu was able to defeat Geto and overpower all the cursed spirits he threw at them. She supported him with physical attacks and used her speed to keep him from danger. To counter Geto's Maximum: Uzumaki, Yuta broke the limits on Rika's cursed energy, making her more powerful than ever before.[2] However, following the bout, this resulted in the curse unraveling from Rika's spirit completely after she decided not to punish Yuta for severing the bond.[3]

Français
Community content is available under CC-BY-SA unless otherwise noted.