Reverse Cursed Technique (反転術式, Hanten Jutsushiki?) is a special type of cursed technique that takes cursed energy and reverses it into positive energy. It is a very complex technique and is mainly used to heal human bodies.

Reversed cursed energy can also be used instead of regular negative energy to power a Cursed Technique Reversal (, Jutsushiki Hanten?). By applying positive energy, the effects of the technique will be reversed. For example, by fueling the Limitless technique with positive energy, Satoru Gojo can bring infinity, which is normally an invisible phenomenon, into reality as a tangible explosive force.[3]

Shoko Ieiri is one of few people who can use a reverse cursed technique to heal others.[4] She is considered incredibly valuable to Jujutsu High. Thanks to her talent for utilizing a reverse cursed technique and her medical knowledge, she earned her position as the school doctor. Despite being incredibly well versed in utilizing reversed cursed energy, she has never been good at explaining how it works to others.[5]

Unlike most cursed spirits Sukuna is capable of using a reverse cursed technique. He's incarnated in Yuji's human body, so he uses reversed cursed energy to restore it rather than cursed energy like a traditional curse would.[2]

In order to push him to making a Binding Vow, he removed Yuji's heart and used his ability to heal as leverage. After they agreed on terms of Vow, he healed Yuji's heart and returned him from death. Mahito mentioned that a reversed cursed technique could revert the shape of a soul back to normal to remove the effects of Idle Transfiguration.[6]

In Shibuya, when Sukuna found Megumi in a state of suspended death, he used a reversed cursed technique to heal him and ensure Megumi survived.[7]

In spite of being the most talented sorcerer in the world with the Six Eyes, Satoru as a first and second year jujutsu high student was always unable to grasp the complex nature of reverse cursed energy. He was completely unable to unleash the Cursed Technique Reversal: Red, failing to activate it in a fight during the Star Plasma Vessel Escort mission as a student.[8]

After being nearly killed by Toji Fushiguro, Satoru tapped into the core of cursed energy and awakened the true powers of the Limitless. This allowed him to utilize a reverse cursed technique for the first time, restoring himself from a near-death state.[9] Applying this same concept to his Limitless technique, Satoru was able to unleash Red on Toji in their rematch.[10]

As a third year student, Satoru further mastered the Limitless and learned to use a reversed cursed technique constantly running through his body in order to preserve his brain while his technique is active. [11]

Satoru after restoring himself from near death.

Yuta Okkotsu learned to utilize a reverse cursed technique early into his tenure as a jujutsu sorcerer due to Rika's immense levels of cursed energy and her ability to unconditionally copy techniques. Yuta first utilized it to heal Maki, Toge, and Panda all at the same time after they were injured by Suguru Geto. Suguru was extremely impressed that Yuta was able to use a reversed cursed technique.[12]

Yuta heals the injuries of his friends.

Yuta offers Naoya healing in return for something else. 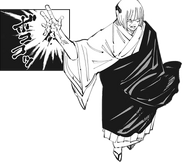 Uraume healing the hole in their hand.