Reggie Star (レジィ・スター, Rejii Sutā?) is a character in the Jujutsu Kaisen series. He is a jujutsu sorcerer from the past who was incarnated to participate in the Culling Game. Reggie lead his own group of sorcerers and served as an antagonist for the Tokyo No. 1 Colony Arc.

Reggie is a man of relatively average height and build with a toned physique. He has light-colored hair that has likely been dyed while his eyebrows and goatee are both darker colored. The tattoo on his left arm is three kanji that translates to "indomitable" in English.

Reggie doesn't wear conventional clothing other than his boxer briefs. Instead, he attaches numerous paper tags to his body. Enough so to cover his entire torso all the way down to his upper thighs. His arms, legs, and feet are all left completely bare. 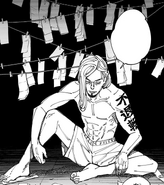 Reggie without the receipts covering his body.

Reggie was an intelligent individual with a playful attitude (emphasized when his dialogue is stylized with a ♡). He adapted to the violence and cruelty of the Culling Game quickly, focusing solely on gathering strong allies while eliminating the weak or anyone who opposed him.[1] Reggie used Remi, a cute girl, to lure in potential allies or targets to gain points from. He claimed he would never kill her for points[2] and then immediately turned around and treated her as completely disposable in battle the next moment.[3]

Reggie's callous attitude extended to his other allies as well. The associates he was looking to collect were just tools he could use to ensure his own progression through the Culling Game. When Chizuru Hari perished, Reggie was embarrassed that his teammate would be killed without even utilizing their cursed technique.[4] He only wished to avenge Hari to make up for lost points.[5]

While Reggie wanted to find allies, he enjoyed conflict and would dispose of anyone he deemed unworthy. More than willing to engage in a fight, Reggie acknowledges his opponent's strength while remaining supremely confident in himself. After seeing Megumi pull his punches, Reggie warned the young sorcerer to fight earnestly and to kill otherwise he'd end up dead.[6]

Reggie maintained his playful disposition in a fight and enjoyed showing up his opponents. While facing Megumi, Reggie prided himself on remaining one step ahead and kept a constant grin on his face while making consistent taunts throughout most of the encounter. He believed sorcerers are nothing but con artists, showcased by him and Megumi constantly trying to outsmart one another with quick and clever planning. Reggie told Megumi they both lacked big moves and they had to peck away at one another, only to ambush him with two trucks not long after.[7]

Reggie admittedly underestimated Megumi and only began to take things more seriously when he lost the advantage. Even when caught inside Megumi's domain, Reggie assumed he'd be protected by Hollow Wicker Basket and taunted his opponent. However once Reggie realized the domain was still a serious threat to him, his smirk faded and Megumi remarked that he "wasn't snickering anymore".[8] Reggie is confident in his own abilities and never gave up on himself despite rapidly losing ground. He considered the worst-case scenario and actively fought to prevent it, commenting "I won't let that happen and that's so me!" while doing so.[9]

Even while openly admitting to Megumi that he was a formidable opponent, Reggie continued to boast that he was even stronger.[10] Reggie's overconfidence led to his undoing and underestimating Megumi ultimately allowed the young man to outsmart him. Thoroughly fooled by his adversary, Reggie repeated that a sorcerer is nothing but a con artist.[11] Despite his attitude, Reggie was modest in defeat and acknowledged his shortcomings. He took the loss well and even gave Megumi all his points as a show of respect to his executioner. With his last words, Reggie told Megumi to let fate toy with him before he dies like a fool.[12]

Overall Skill Level: Reggie was a powerful jujutsu sorcerer whose skill commanded respect from his group of Culling Game players, who were mostly strong fighters in their own right. He matched up well against Megumi and pushed the young sorcerer to his limit in a battle of jujutsu and deception. Reggie had a strong handle on his cursed technique, Contractual Re-Creation, and applied it with an elite level of adaptability, able to always summon exactly what he needs at a moment's notice.

Reggie overpowered Divine Dog: Totality, one of Megumi's most powerful shikigami. Megumi wanted Divine Dog to take him down non-lethally but Reggie stabbed its mouth with kitchen knives.[13] While fighting alongside Hazenoki to ambush Megumi, Reggie summoned gas to enhance his partner's explosions.[14] After wearing Megumi down, Reggie used a receipt for a day at the spa to rejuvenate and pursued him using flying drones and a moped.[15] He overpowered Megumi with his uncanny combination of martial arts and re-created projectiles.[16]

Even when faced with a domain, Reggie was well prepared with an anti-domain technique.[17] When his barrier failed to protect him, Reggie was still able to withstand the onslaught from Megumi's incomplete domain. Reggie's strategic mindset and physical toughness are what allowed him to survive and eventually turn the domain's conditions against its caster.[18]

Reggie has a clear weakness to water due to how his technique functions. He is normally able to compensate for this or avoid water altogether[19] but it was exploited by Megumi toward the end of their fight. In the end, Reggie was ultimately outsmarted after believing Megumi had already played his trump card by nullifying Contractual-Recreation and couldn't summon Divine Dog. He was able to overwhelm Megumi in a physical fight, but Divine Dog's return caught him off guard, and its superior speed defeated him.[20]

Master Hand-to-Hand Combatant: Reggie's favored form of combat is an unorthodox mix of a random assortment of re-created items and effective martial arts. This combination overwhelmed Megumi, where Reggie knocked him to the ground with a front kick after injuring him with a knife hidden within a daikon.[21]

Even without the use of his cursed technique, Reggie was able to outduel Megumi with pure martial arts. Megumi was forced to acknowledge Reggie's skills and was heavily pressured despite wielding a cursed tool. Reggie confidently threw quick, powerful combos of punches and kicks enhanced by his great physical prowess with expert-level comfort. He was proficient enough to completely outpace Megumi in both primary hand-to-hand combat exchanges in their bout.[22]

Expert Weapons Specialist: Reggie had the ability to summon all sorts of objects, which granted him a wide potential arsenal. He had a good handle on how to use everything he re-created. Reggie could comfortably wield bladed weapons like kitchen knives, combat knives, and machetes.[23] He could even use conventionally harmless items like house plants to deal effective damage.[24]

Great Tactical Intellect: Reggie's most prominent asset is his analytical mind and talent for subterfuge. He has a flair for deception and is a strategic fighter who aims to stay one step ahead of his opponents. Reggie is an analyst who is aware of his situation and looks to gain an advantage by any means possible. During the early stages of the Culling Game, Reggie theorized that he couldn't take the event at face value. He predicted Kenjaku would drop a metaphorical bomb on the game after only the strongest players remained. To prepare for this situation, Reggie focused on gathering allies and points. He used Remi to lead players to him where he could assess their abilities. Weak players were disposed of while Reggie attempted to recruit strong sorcerers like Megumi.[25]

Reggie was prepared for a fight in case Megumi resisted. As soon as Reggie declared the negotiation had broken down, his associates immediately enacted a telegraphed ambush.[26] Even while fighting Megumi one-on-one, Reggie constantly analyzed the mechanics of the Ten Shadows Technique.[27] He also deceived his opponent with several verbal traps. Reggie mentioned both of them lack decisive attacks to eliminate one another but soon after he sent two large trucks barrelling straight for Megumi.[28]

When Hollow Wicker Basket proved ineffective against Megumi's domain, Reggie was eventually able to deduce on his own that this was due to the barrier being incomplete.[29] He turned Megumi's Chimera Shadow Garden against him by deducing that its user has to bear the weight of anything within their shadow. By dropping re-created cars into the shadow, Reggie put immense pressure on Megumi and turned the tide of their battle.[30]

Even while under the weight of Max Elephant, Reggie used his tactical mindset to visualize scenarios where he could still win. He devised a hasty plan to enter the shadow voluntarily but he was able to assess the risks and realize that could easily backfire. After the weight forced Reggie to fall into the shadow, Reggie was able to save himself with quick thinking. He commanded one of the cars in the shadow to bring him back to the surface and then unleashed his ace, a small house.

Reggie's ace likely would have won him the battle but Megumi was able to counter with his own tactical intellect. Despite the jarring situation, Reggie was able to figure out exactly what happened and how his opponent escaped. In the last stretch of their fight, Megumi used Reggie's analysis against him. Reggie inaccurately believed that Megumi's shikigami couldn't be resummoned when they were injured. Megumi reinforced this notion by keeping Divine Dog out of most of their battle. Furthermore, Megumi used his domain and dropped Reggie into a pool to negate Contractual Re-Creation. This led Reggie to believe that Megumi's only option was to summon something other than Divine Dog, leaving him open to a lethal attack from that very shikigami.[31]