Prison Realm (, Gokumonkyō?) is a special grade cursed object containing a barrier capable of sealing absolutely anything or anyone inside of an inescapable pocket dimension.

Prison Realm is the final remains of the Buddhist Monk Genshin. Referred to as a "taboo object"[1], it is a living barrier so powerful that there is nothing it cannot seal.[2]

In its unused form, the cursed object appears as a cube small enough to fit in a person's hand and is wrapped in talisman constraints. The curse is activated with the incantation "gate open". On command, the cube opens into a mass of flesh stretched out by four corners with the remains of the cube at the edges. It has a giant bleeding eye in the middle with stitches keeping it open to stare at its target.[3]

Conditions must be met for Prison Realm to activate. In order for the target to be sealed, they must be kept within a four-meter radius for long enough for the cursed object to take hold. In Satoru Gojo's specific case, he had the potential to escape Prison Realm's range in time, so he had to be kept within the required radius for a minute's worth of time within his brain.[4]

The next stage of sealing involves the mass of flesh transferring to the target's body in a flash, ensnaring them. This renders them immobile and unable to access any of their cursed energy.[5] The sealing process can be completed with the command "gate close", reverting Prison Realm into its small form, trapping the target inside indefinitely. Only one occupant can be contained at a time. Unless the person inside takes their own life, Prison Realm cannot be used again.[6]

While "processing" a strong sorcerer such as Satoru Gojo, Prison Realm becomes extremely heavy and cannot be moved.[7] Several eyes open around the surface of the cube as well.[8] Inside the pocket dimension of the Prison Realm, time doesn't pass and the sealed person is surrounded by dark skeletons and an ominous atmosphere.[9] 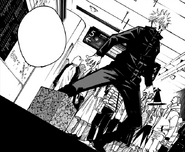 1. Prison Realm placed in front of the target. 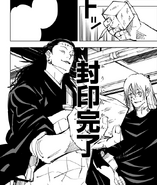 4. Gate closes and the sealing is complete.[10]

The primary cursed object is the conceptual "front gate" of the Prison Realm. There exists a "back gate" that is necessary for freeing anything sealed inside. By sealing the rear gate, Master Tengen intended to hide the existence of Prison Realm. However, this failed and Kenjaku found the front gate somewhere overseas.

Once Prison Realm has sealed something, the authority to open it rests with the bearer of the front. The bear of the back cannot open it and would have to break it open with a cursed technique that has the ability to cancel or nullify other cursed techniques. (i.e. the techniques imbued within the Inverted Spear of Heaven and the Black Rope.)[11] 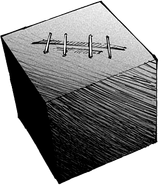 The "back" of Prison Realm.

Prison Realm was the crux of Pseudo-Geto's plan to seal Satoru Gojo during the Shibuya Incident.[12] The strongest jujutsu sorcerer obviously couldn't be defeated, so Geto convinced Mahito and his allied special grade cursed spirits to align themselves with his plan to seal Gojo inside Prison Realm.[13]

The plan took place on October 31st in Shibuya. With Gojo being as powerful as he is, it was a requirement that they use non-sorcerers to stifle his movements and put him on edge. Mahito, Jogo, Hanami, and Choso all worked together to buy enough time for Geto to set up Prison Realm.[14] When the time was right, Prison Realm appeared suddenly behind Satoru.[15]

From a distance, Geto commanded it to open and Satoru's gaze was met by Prison Realm's eye. He attempted to flee but Geto revealed himself for the first time since the original Suguru Geto's death. This distracted Satoru for just an instant, but it was a minute's worth of time within his brain. Prison Realm took hold[16] and Satoru's seal was completed shortly afterward.[17] Prison Realm required time to process him, but Geto protected the area long enough to eventually escape Shibuya with Prison Realm in hand.[18]