Playful Cloud is a three-section staff connection by three rings in between the joins of the weapon. Each staff is decorated with a flame-like pattern near the ends by the metal which connects to the chains.

It is the only special grade cursed tool that is not imbued with a cursed technique. Instead, Playful Cloud's strength relies on the raw power of its user. Playful Cloud has been best utilized by those with incredible physical abilities rather than those with high levels of cursed energy.

Playful Cloud amplifies the user's strength with its cursed energy, allowing even those with little to no cursed energy to overpower special grade cursed spirits.

Playful Cloud originally belonged to Toji Fushiguro. It was being stored inside his inventory cursed spirit when it was absorbed by Suguru Geto. Gaining the inventory curse also gave Geto possession of Playful Cloud. He used the weapon to fight Yuta Okkotsu but was defeated and Playful Cloud was taken by Satoru Gojo. Since Playful Cloud was Toji's, the Zenin Family declared they were the rightful owners of the cursed tool. With Satoru's help and influence, Playful Cloud was officially loaned to Maki Zenin. This is how she obtained it before the Kyoto Goodwill Event.[1]

First shown in possession by Suguru Geto during his attack on Jujutsu high, Playful Cloud is an extremely powerful weapon that allowed the curse user to fight on equal terms against an enraged Yuta Okkotsu. After a heated clash between the two, Suguru lost possession of Playful Cloud after being struck by Yuta. After his failed attack, Playful Cloud came into possession by Tokyo Jujutsu High.

Playful Cloud's powerful abilities were displayed again when Maki Zenin, a girl with little cursed energy, was able to wield it to contend with a special grade cursed spirit. When his weak points were struck by a blow from Playful Cloud, Hanami was knocked away with great force.

Maki and Megumi were able to trade cursed tools mid-battle to confuse Hanami, leaving him open to attack from Playful Cloud. Even Megumi, who possesses only average physical strength, was able to harm Hanami using the staff. Megumi did admit however that he's uncomfortable wielding a three sections staff. Although she was eventually overpowered, Playful Cloud's equalizing power allowed Maki to contend with Hanami despite being injured.[2]

Maki and Megumi using the cursed tools together. 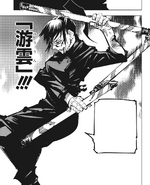 As a special grade cursed tool, Playful Cloud possesses a considerable amount of cursed energy. This makes it compatible with Aoi's cursed technique, allowing him to switch it out with any desired target. After Megumi left Playful Cloud in the river, Aoi was able to summon it to his side by switching it out with Yuji. With a powerful blow infused with his own cursed energy, Aoi was able to smash Hanami's weak points and nearly defeated the cursed spirit.[3]

Enhanced by Toji's innate physical prowess, the pure power provided by Playful Cloud devastated Dagon. In Toji's hands, Playful Cloud ripped through swarms of the special grade curse's shikigami. It even destroyed Dagon's water shield in a single hit, a technique that withstood blows from Naobito, Nanami, and Maki at the same time.

By rubbing the edges of Playful Cloud together, Toji sharpened the three-section-staff into a spearing weapon. By stacking the chained ends of the weapon together, Toji even vaulted himself high into the air and stabbed Dagon through the head in one motion. While delivering the finishing blows, Toji snapped the chain on Playful cloud and violently murdered Dagon. This ultimately broke all the links between the weapon, leaving Toji with a single sharpened staff. [4][5] Toji used what remained of the weapon to fight his son Megumi. He stabbed himself in the head with the sharpened end of Playful Cloud to commit suicide and save Megumi.

Playful Cloud after Toji sharpened it.