Panda (パンダ, Panda?) is a supporting character in Jujutsu Kaisen and a protagonist in the Prequel Series. Not an actual panda, he is an Abrupt Mutated Cursed Corpse created by Principal Masamichi Yaga and attends Jujutsu High as a second-year student.

Panda has the appearance of a fully-grown real panda. He stands much taller than his classmates with his bear-shaped frame and sometimes dons clothing. He has worn armbands, scarves and jackets at times. 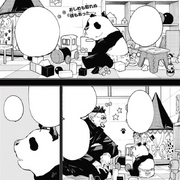 Panda as a child.

Panda is generally a very upbeat and calm individual with his own sense of humor. When he was younger he spoke in an extremely proper form more akin to a computer but as time as passed Panda has developed his own unique personality. Panda sees humans as strange creatures and doesn't strive to be like them, while still respecting them as a species.

Panda is very sarcastic at times and tends to make light of every situation. Even while Mechamaru was trying to kill him Panda continued to poke fun at his fellow Cursed Corpse. It took Mechamaru nearly destroying Panda's body for him to even become "kind of mad". Following their fight, Panda was able to sympathize with Kokichi Muta and even promises to visit his real body one day.

Overall Skill Level: Panda is a Grade 2 Sorcerer and an Abrupt Mutated Cursed Corpse, the most advanced of his kind. With a natural affinity for Jujutsu, Panda is capable of exorcising Curses based solely on his physical abilities. He is highly intelligent and able to think one step ahead of his opponents in a fight. Panda's physiology in also provides a unique challenge in battle. The only way to take him down is by destroying the cores of Cursed Energy that act as his heart. Additionally his body is extremely durable and he's capable of using Jujutsu protection to reinforce it as well.

Enhanced Strength: Due to the size and sturdiness of his body, Panda is naturally very physically strong. He can exorcise Curses with simple blows, effortlessly carry allies on his back, and run clean through walls as a few examples of his base strength. Panda has also proven to be a very powerful puncher, able to stun Aoi, an exceptionally durable fighter, with a right hook as well as batter Mechamaru, a metal Cursed Corpse, with straight punches.

Enhanced Endurance: Panda's physiology as a Cursed Corpse allows him to absorb high amounts of damage. He was able to easily brush off Mechamaru's Ultra Cannon and even took the brunt of his opponent's strongest ability and survived.

High Tactical Intellect: Panda was highly intelligent from a young age due to the circumstances of his creation and his education under Principal Yaga. In a fight, Panda is highly analytical and tries to stay one step ahead of his opponent. Even Suguru Geto, a Sorcerer with immense tactical reasoning, was surprised by Panda's cleverness in battle. Against Mechamaru, Panda consistently thought about every move before he made it. He was able to calculate the angle of Mechamaru's cannon so it wouldn't also hit his allies. In that same battle, Panda fooled Mechamaru multiple times by faking an injury to his cores and won that fight because his opponent underestimated his intelligence.

Retrieved from "https://jujutsu-kaisen.fandom.com/wiki/Panda?oldid=15182"
Community content is available under CC-BY-SA unless otherwise noted.