Noritoshi Kamo (, Kamo Noritoshi?) is a character in Jujutsu Kaisen. He is a third-year at Kyoto Metropolitan Curse Technical College.

Noritoshi is a tall young man with black hair kept in two strands in front of his face, wrapped in bandage-like cloth. He has thin eye brows and normally keeps his eyes closed, displaying little emotion the majority of the time.

He sports a dark-colored, shozoku version of the Jujutsu student uniform and zori sandals with white socks.

As a child Noritoshi wore his hair in a similar style, but it was shorter and didn't require wrappings for his bangs. Growing up Noritoshi often wore a dark colored yukata robe. 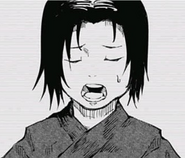 Noritoshi is normally very calm and stoic in most situations, whether it be in front of his allies or rivals. Excluding Aoi, he is a senior and a leader for his peers at the Kyoto school other than Aoi. He also feels a kinship to those who come from Sorcerer Families like Megumi. His loyalty to the Sorcerer Families has distorted his feelings when it comes to others.

Noritoshi has actively treated Mai as though she were beneath him because she didn't inherit the Ten Shadows Technique. Instead, he speaks familiarly with Megumi, despite his lack of real ties with the Zenin Family. Additionally, Noritoshi feels that Yuji Itadori must be eliminated because he's a threat.

The current heir to the Kamo line was born from the current head's mistress because the rightful wife couldn't give birth to a son who possessed Blood Manipulation. In order to protect his mother, Noritoshi accepted the responsibility of being heir to the head of the Kamo Family. This pressure has caused him to embody all of their twisted values, often not thinking for himself, forced to do so for his mother's sake.

Noritoshi became a Jujutsu Sorcerer because his mother believed in his potential to help people. Encountering Yuji helped remind him of this because Yuji is a Sorcerer for the same reason. One day he hopes to reconnect with his mother after he's become a great Sorcerer.

Later Noritoshi attends the pre-Kyoto Goodwill Event meeting with the other Kyoto College students and principal Yoshinobu, where Yoshinobu tells them to kill Sukuna's host. As Aoi gets annoyed by Yoshinobu's instructing them to be careful and leaves, Noritoshi tries to stop Aoi. Aoi simply threatens them all and leaves. Noritoshi then continues to talk with the other about what to do with Yuji, where Noritoshi tells them that they will all attack Yuji together. As Momo worries about Toge, Noritoshi says that it won't be a big deal if they know when its coming.

Before the event begins, Noritoshi is given tool to control as grade 1 curse spirit to kill Yuji by Yoshinobu.

After fighting Megumi for a little bit, Noritoshi back off and compliments Megumi on his fighting abilities. Noritoshi and Megumi then have a conversation about why he plans to kill Yuji and why they are similar even through Megumi says that they are not. When a shikigami appears behind him, Noritoshi prepares to fight it but the shikigami suddenly disappears. Noritoshi figures out what Megumi is doing, and prepares for Megumi's next attack. As Megumi uses a shikigami to force Noritoshi out of the building, Noritoshi thinks about how he is now in a bad situation. As Megumi uses his Nue Shikigami against Noritoshi, Noritoshi thinks about why he can't lose and uses a technique to bind Megumi's Nue.

When Noritoshi and Megumi notices Toge and Hanami's fight, they are forced to run away by Toge. Noritoshi then wonder why a cursed spirit is at the college and who made the screen that was just made. As Hanami goes to attack, Toge stops him which Noritoshi attacks Hanami with a technique but it doesn't work on Hanami. As the three attack Hanami, they all stop when Hanami start to tell them the reason why he wants to kill all the humans. As Hanami continues to attack the three, Noritoshi and the other two run away from him. When Toge manages to stop Hanami, Noritoshi uses a technique and manages to damage to branches on Hanami's head. After managing to wounding Hanami, the three quickly run away. Noritoshi thinks about their strategy on how they are handling Hanami, and how they have to get out of the screen and meet up with the principal.

As the three leave the building they were in and prepare to face Hanami again. As they go to attack Hanami, Toge's voice gives out and Noritoshi is injured by Hanami. When Hanami goes to finish Noritoshi off, Megumi quickly rescues Noritoshi. Noritoshi is then left behind when Maki and Megumi fight Hanami at another location.

Kokichi Muta manipulated events to ensure his classmates would be out of harm's way during the Shibuya Incident. On the train ride to the location, Noritoshi and his fellows give Miwa privacy as she cries over Mechamaru's death and her own powerlessness. Something Noritoshi also laments.

At 11:36pm, Noritoshi arrives with his allies and opens fire on Geto in one last attempt to recuse Satoru Gojo. Choso's sudden arrival and announcement of that the impostor is actually Noritoshi Kamo, much to Noritoshi's confusion until Utahime and Atsuya describe his ancestors reputation. As Choso unleashes his Blood Manipulation, Kamo is shocked by his strength. Planning to use Choso's distraction to attack Noritoshi, Kano, Panda and Yuji all get ready to attack but are stuck by Uraume's Frost Calm attack which freezes them in place.

Overall Skill Level: Noritoshi is a Semi-Grade 1 Sorcerer with the ability to use the Kamo Family's acclaimed Inherited Technique: Blood Manipulation. He is a skilled marksman who incorporates Jujutsu into his archery. Kamo is respected as a leader among his peers thanks to his maturity and high tactical mind. During the Goodwill Event, Kamo acted as the leader of the Kyoto Team and lead them into battle against Yuji.

Kamo was able to fight evenly with Megumi, a talented first-year Jujutsu student capable of using the Zenin Family's Inherited Technique: Ten Shadows Technique. He was also effective while fighting alongside Toge and Megumi, acting as half of their offensive while slowly creating distance from Hanami. Although Noritoshi was eventually defeated, he was a key reason Megumi was able to discover Hanami's weakness.

High Tactical Intellect: Noritoshi organized an all out assault in an attempt on Yuji's life. The ambush was sudden, and might have been effective if not for Aoi's interference. When their group was forced to retreat, Kamo was quick to order his fellow to secure their main information gatherer, Momo, who had been compromised. While fighting Megumi, Noritoshi employed tactics such as blocking Megumi's view in order to close the distance and engage in hand to hand combat with the Shikigami user. In the battle against Hanami, Noritoshi knew the students best bet would be to use their Cursed Techniques to stall Hanami and eventually expose a weak point.

Retrieved from "https://jujutsu-kaisen.fandom.com/wiki/Noritoshi_Kamo?oldid=16802"
Community content is available under CC-BY-SA unless otherwise noted.