Nobara Kugisaki (, Kugisaki Nobara?) is the tritagonist of the Jujutsu Kaisen series. She is a first-year student and grade 3 jujutsu sorcerer at Tokyo Jujutsu High studying under Satoru Gojo alongside Yuji and Megumi.

Nobara is a relatively short girl with a slim figure. She has mid-length orange hair that reaches to her neck that is styled with bangs that cover the right side of her forehead. Nobara has orange eyes, long eyelashes, and thin eyebrows of the same color.

Nobara's jujutsu school uniform consists of a dark blue gakuran-style top (a button-down jacket) and a long matching skirt that reaches to just above her knees. She also sports black stockings and brown shoes along with her signature brown belt that holds her tools for jujutsu.

As someone who enjoys dressing up, Nobara has several different outfits. She didn't have a tracksuit prior to enrolling at Jujutsu High and bought one shortly after. The tracksuit included a white and blue hoodie accented with a flower pattern, black leggings, and white shoes.[3] 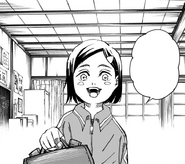 Nobara as a child.

Nobara in the manga (gray).

Nobara is a confident and brash young woman with an unshakable character. More than anything, Nobara is determined to stay true to herself no matter what.[4] She takes great pride in being both a pretty girl and a strong fighter, refusing to let anyone influence her.[5]

Initially, Nobara can appear to be a very obnoxious and arrogant person. She first introduced herself to Yuji and Megumi by expressing how inferior they were.[6] She also argued with Yuji for the greater part of their first mission together.[7] Despite her abrasive attitude, Nobara is actually an incredibly caring and dutiful person, but would never let most people see that side of her. After fighting alongside each other in several missions, Yuji and Megumi grow to become Nobara's closest allies.

Even from a young age, Nobara was outspoken and different from everyone else in her small town.[8] She felt everyone was crazy and was determined to trade the small countryside to the big city. Nobara was only ever drawn to outsiders who moved into the village like Fumi and Saori, especially the latter. She looked up to Saori to a great degree and was disheartened when she was forced out of the neighborhood. Saori leaving made Nobara want to escape the village more and aspired to meet Saori again one day. Before attending Jujutsu High, Nobara made a promise to Fumi that the three of them would reunite in Tokyo.[9]

Staying true to who she is, Nobara carries herself confidently as a jujutsu sorcerer. Whenever Yuji and Megumi tend to be decisive, Nobara is willing to take charge even if the boys don't like it. While they're prone to panic in some situations, Nobara is able to remain relatively level-headed regardless of what's happening. Nobara loves joking around in civil situations and is a huge trash talker in combative ones, no matter who it is. Among all her peers, Nobara looks up to Maki Zenin in particular. She loves the way Maki carries herself and admires her strength as someone fighting against the oppression of their own family.[10]

Nobara and Yuji are the two class clowns among the first-years that typically annoy Megumi to for a laugh any chance they get. Although she likes to pretend that she doesn't like the boys, Nobara was upset after Yuji's death following the Detention Center incident.[11] She even shed a tear upon his revival and demanded an apology from him.

Momo Nishimiya insulted Yuji during the Goodwill Event while trying to justify Mai Zenin's undesirable attitude, annoying Nobara. Nobara dislikes Mai, which upset Momo and caused her to monologue about the gender-based discrimination in the Zenin Family. This only served to annoy Nobara, who couldn't care less about any sentiments based in "boys versus girls". Like Saori, Maki is a good person despite the circumstances that surround her while Mai is not. Nobara doesn't believe people are excused just because they come from a difficult background. She openly rejected Momo and told her to consider the person Yuji before condemning him, citing that life isn't just a job.[12]

Upon first enrolling at Jujutsu High, Satoru Gojo was unsure how a girl from the countryside would fair against gruesome-looking cursed spirits. Satoru believes it takes someone to be virtually insane to voluntarily be a jujutsu sorcerer or else they'll quit quickly. Despite her distaste for crazy people, Nobara has proved she is plenty crazy herself.[13] She passed Satoru's test with flying colors and didn't hesitate to inflict pain on herself during the battle with the Death Paintings, Eso And Kechizu.[14]

In order to counter Eso's cursed technique, Nobara willingly stabbed herself with nails and smiled while doing it. She appeared to take pleasure in outwitting her special grade opponents and didn't hesitate to injure herself further in order to ensure victory and her own survival. Together, she and Yuji were victorious and ended up killing both brothers. Although Yuji was guilt-ridden over killing the brothers, Nobara was relatively unphased. She admitted that she expected killing came with the job of being a jujutsu sorcerer. Noticing that Yuji was acting strange, Nobara comforted him in her own way by claiming that they were both accomplices in the murder.[15]

Nobara has a high sense of duty as a jujutsu sorcerer and is a prideful fighter. During the Shibuya Incident, Nobara's pride was hurt by her near-defeat at the hands of Haruta Shigemo. After being rescued by Kento Nanami, Nobara wanted to help rescue Satoru from being sealed and redeem herself. However, Nanami refused to let her and ordered her to wait to be rescued.[16] Nobara ignored Nanami's warning because she couldn't bring herself to leave the city while all her allies were still fighting.[17]

Upon encountering Mahito's double soon afterward, Nobara admitted she didn't have much to show for October 31st and believed beating him would be a solid contribution.[18] Nobara remained confident in her strategy and managed to injure Mahito's soul, forcing him to retreat. Nobara chased him and attempted to exorcise the curse. This overconfidence ultimately proved to be Nobara's downfall.

Mahito switched places with his double while Nobara's guard was down against his hands, letting him score a direct hit to her face with Idle Transfiguration.[19]

Realizing her time was likely at an end, Nobara took a moment to recall her past life in the village. She used to believe that crazy people like those villagers did nothing but step on other people's lives. However, after meeting all the wild and crazy sorcerers at Jujutsu High, Nobara changed her mind. During this exchange, Yuji watches Nobara with extreme worry and horror. In what could have been her last moments, Nobara smiled at Yuji and asked him to tell everyone that it wasn't so bad in the end.[20]

Overall Skill Level: Nobara is ranked as a grade 3 jujutsu sorcerer by Jujutsu High. This is mostly due to her status as a young first-year student and inexperience working as a sorcerer.

Nobara has showcased numerous times the capability to contend with jujutsu users ranked leagues above in terms of grade. Coming into school, Nobara had a solid understanding of how to exorcise curses with her innate technique.[21] She also had the mental fortitude to handle the job but lacked physical ability. While fighting in the Eishu Detention Center, Nobara defended herself adequately until she ran out of nails to fight with.[22]

Afterward, Maki took Nobara under her wing and trained her to improve her physical prowess. The training included heavy stamina conditioning and getting used to getting knocked down Panda.[23] By the time of the Goodwill Event, Nobara showcased she was in much better shape as a close-combat fighter.

In Nobara's fight with Momo, the Kyoto third-year had the advantage of flying above Nobara on her broom. Nobara eventually figured out a way to outmaneuver Momo by using the environment to her advantage. Nobara was able to last long enough in that fight due to Maki and Panda's training. She was knocked down several times by gusts of cursed energy wind, but Nobara endured until she figured out a way to counterattack.[24]

Despite ultimately being eliminated from the Goodwill Event, Nobara has since demonstrated the potential to combat special grade curses. Alongside Yuji, Nobara was able to fight on even terms with Eso and Kechizu. Both the students were poisoned by the Death Painting's blood technique, but Nobara used that connection against her adversaries. Thanks to her cleverness and ability to think clearly in high-pressure situations, Nobara instantly figured out a way to counter her opponent's technique.[25]

Nobara's adaptability and fearlessness lead her to use Resonance on herself to injure Eso and Kechizu at the same time. This involved stabbing herself with nails to activate Resonance, but Nobara was more than happy to do so. The poison, as well as the pain from stabbing herself, helped Nobara enter a state of extreme focus, allowing her to unleash the power of Black Flash as well. Nobara and Yuji defeated the special grade curses, prompting Mei Mei (via payment from Satoru) and Todo to recommend her and all her peers for grade 1.[26]

During the Shibuya Incident, Nobara underestimated the curse user Shigemo and was taken off guard repeatedly by his uncanny abilities. Shigemo was landing the perfect shots on Nobara, making it difficult for her to keep her balance, let alone fight back. Thinking on her feet, Nobara got Shigemo to talk in order to buy herself some time. This lead to Nanami arriving in time to defeat the curse user and rescue her.[27]

Having little to show for the incident, Nobara continued fighting rather than retreating as she was ordered. She encountered Mahito, an opponent she had information on unlike with Shigemo. In order to combat someone of his caliber, Nobara focused on trying to reach the core of cursed energy, the same feeling that accompanied unlocking Black Flash.

Nobara was able to plan out a strategy accordingly and executed it flawlessly. She lead Mahito's double to believe that she was recklessly focusing on physical damage that couldn't hurt his soul. In reality, Nobara knew she could hurt Mahito's soul if she could use his body as an effigy for her technique. After leading him into a false sense of security, Nobara struck his soul and dealt Mahito major damage. Almost immediately, Mahito recognized Nobara as one of his natural enemies in the same way he views Yuji.[28]