Mei Mei (, Mei Mei?) is a supporting character in the Jujutsu Kaisen series. She is a grade 1 jujutsu sorcerer who works independently and only in exchange for money. She is also the older sister of Ui Ui and was a senpai of Satoru Gojo and Suguru Geto during their time at Jujutsu High.

Mei Mei is a young woman with light peach skin and small, sharp dark brown eyes with thin eyebrows. She has long blue-tinted silver hair normally styled into two braids, one that covers her face and the other hangs behind her head down past her shoulders. This appears to be her preferred style while working as a sorcerer. While relaxing or casually playing ping pong, she'll let her hair down or style it into a single braid.

As a jujutsu sorcerer, Mei Mei sports a dark bodysuit with a skirt attached. There are also pants underneath that cover her legs and tuck into boots of the same color. (In the anime, Mei Mei's suit is purple and her boots are light brown). In 2006, Mei Mei wore a suit and tie with her hair kept in a high ponytail and two parallel bangs that left her face completely unobscured. 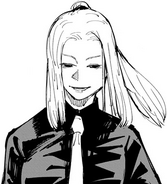 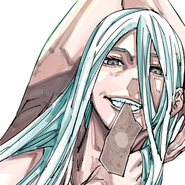 Mei Mei is a very calm and relaxed woman who can keep her cool in any situation. While very kind and honest, Mei Mei is very open about being greedy. Monetary value is the most important thing and quite possibly might be the only important thing to her. She considers herself to always on the side of money and doesn't get out of bed for free. Allegiances and politics don't matter to Mei Mei as long as she gets paid for being a sorcerer. She also claims to not understand relationships not based on money.[2]

Mei Mei believes that anyone else's life's value is proportional to how useful they are to her. "Service potential", a concept not supposed to be applicable to humans, is life itself for Mei Mei. She stated to a defeated curse user that she beat him because he was a murderer who took lives but didn't understand their value. In her eyes, Ebina had no service potential, so Mei Mei didn't hesitate to kill him.[3]

Despite her very questionable morals, Mei Mei maintains a relatively friendly demeanor at all times. She is interested in the potential and abilities of her allies, often recognizing their growth and commending them. Mei Mei is one of the people in agreement that Maki Zenin should have been long promoted from grade 4.[4] She also recognized that Yuji was exceptionally strong without an innate technique and compared him to Kusakabe.[5]

Overall Skill: Mei Mei is a grade 1 sorcerer recognized by many for being a more than capable fighter. Satoru Gojo has stated in the past that he believes Mei Mei is strong, a comment that the strongest sorcerer doesn't hand out lightly. Satoru and the others at Jujutsu High deemed Mei Mei so capable they thought it was strange a mission went longer than usual while she was on it and concluded something strange must have happened.[6]

Mei Mei originally believed she was born with a weak innate technique because it only allowed her to control birds and that was it. As a result, she trained herself to be effective without it, crafting herself into a close-quarters combatant. Thanks to this training, Mei Mei was effortlessly able to defeat Niji Ebina, a curse user believed to be as strong as semi-grade 1.[7]

Directly after killing Pseudo-Geto's assassin, Mei Mei had to face his special grade disease curse summoned via cursed spirit manipulation. The Smallpox Deity trapped Mei Mei within its Domain Expansion with conditions that could kill her in just three seconds. She claimed that she couldn't remember the last time her life was in danger before this, suggesting that she hadn't been defeated or injured in a long period of time while working as a sorcerer.[8]

Despite the overwhelming disadvantage, Mei Mei was able to defeat the special grade disease curse with her younger brother's help. Her intellect and combat experience helped her outmaneuver the cursed spirit and exorcise it. This feat even impressed Pseudo-Geto, who admitted Mei Mei was exceptional for a jujutsu sorcerer of the modern era.[9]

Master Armed Combatant: In a fight, Mei Mei defaults to using her battle-axe to engage her opponent at close range. She looks to cleave her opponents in two with fierce swings, doing so with incredible speed and precision considering the size of the axe. A single swing from her axe was able to kill a curse user[10] as well as sever the arms of a special grade cursed spirit.[11] In her battle with the Smallpox Deity, Mei Mei was able to break out of a coffin buried underground by a giant gravestone, shattering them both in a single attack. She did so in under three seconds each time, getting faster with each attempt.[12]

Great Tactical Intellect: As a grade 1 sorcerer, Mei Mei has a lot of battle experience against curses and is very astute when dealing with them. While trapped inside a barrier capable of manipulating time and space, Mei Mei was able to devise a plan to escape with Utahime.[13] She was entrusted with the role of a squad leader during the Shibuya Incident and tasked with investigating Meiji-Jingumae station. Before heading inside, Mei Mei was smart enough to use her cursed technique to her advantage, using her crows to scout out the inside. This allowed her to devise a plan accordingly, which was well executed by her team.[14]

In the heat of battle, Mei Mei kept calm and devised a plan despite being under the pressure of an enemy domain expansion. She not only deduced the specific conditions of the domain after experiencing them just a few times, but also picked out the domain's weakness as well. Mei Mei recognized that the Smallpox Deity could only target one person at a time and devised a counterattack based on that. Her intellect allowed in combination with her combat skills allowed her to execute her plan flawlessly and defeat an opponent of a superior rank.[15]