Megumi Fushiguro (, Fushiguro Megumi?) is the deuteragonist of the series. He is a first-year student at the Tokyo Metropolitan Magic Technical College, and also a descendant of the Zenin Family.

Megumi is a tall, dark-haired boy with light green eyes. He wears the standard uniform of Tokyo Metropolitan Magic Technical College which consists of a long-sleeved shirt and a high collar of dark color, dark trousers and shoes.

While outwardly stoic and calculating, Megumi wishes to help protect people he sees as good or kind. He belives that the world is unfair and that a Shaman is a tool to ensure kind people are given more chances to live. Claiming it to be his selfish and irrational desire, he does not see himself as a hero for doing this. This belief that good people deserve saving motivated him to Yuji Itadori from immediate execution and refused to regret the choice even as Sukuna was about to kill him. The other side of his worldview is that he is quite callous when discussing the deaths of criminals and killers as he believes they are not saving.

He is also quite a secretive person, as shown when Nobara complains that Megumi hardly tells them anything about himself.

Megumi entered the college as a Second Grade Shaman. He is considered to have high potential by Noritoshi Kamo, Mai Zenin, and even Sukuna. Sukuna notes that Megumi's willingness to use hand-to-hand combat makes him different from other Shikigami users. According to Satoru, Megumi has even more potential and skill than Yuji. He is able to use his physical attacks in combination with his Shikigami to entrap his opponent.

Although not as strong as Yuji, Megumi has been shown to possess a high level of physical proficiency. When he was in junior high, he beat up half the punks in the area.

Megumi's technique makes it difficult for him to wield weapons at the same time, as his curse forms need both hands. He has started to train with polearms under Maki Zenin's training. He also once used tonfa to confront Noritoshi Kamo.

Cursed Technique: Megumi's Curse Form is called Shadow Technique of Ten Types (, Tokusa no Kagebōjutsu?), a curse form originated from Zenin Family, about using shadows to create Shikigami, and processing ten at once. He can create various advanced Shikigami, and uses the shadow to contain objects, as well.

Shaman Techniques: These technique are ones that any shaman is capable of using. 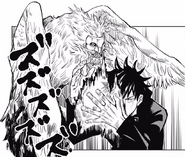 Retrieved from "https://jujutsu-kaisen.fandom.com/wiki/Megumi_Fushiguro?oldid=7488"
Community content is available under CC-BY-SA unless otherwise noted.