Limitless (無下限, Mukagen?) is an inherited technique passed down within the Gojo Family. This technique brings the concept of "Infinity" into reality, allowing the user to manipulate and distort space at will.

While any member of the Gojo Family can hereditarily gain this technique, only those who also possess the Six Eyes as well can truly master the power of the Limitless.[1] Satoru Gojo is the first sorcerer to be born with both the Limitless and the Six Eyes in the last four hundred years.[2][3]

Infinity (無限, Mugen?) is the base state of the Limitless and is essentially the power to stop.[4] The Limitless technique operates the same way convergent and divergent sequences do in mathematics. The Infinity is the convergence of an immeasurable series, anything that approaches the infinity slows down and never reaches the user.[5] This is because the technique takes the finite amount of space between the two subjects and divides it an infinite amount of times.[6]

In mathematics, no matter how many times someone divides a number it will never be reduced to zero. Instead, they will be left with fractional units so infinitesimal it would become immeasurable to their eye. The Limitless brings this concept into reality, so anything that attempts to penetrate this infinitely divided space will slow down to the point of appearing to stop completely.[7]

The invisible barrier created by the Infinity can be expanded to keep harmful substances away from the user[8], or to overpower someone attempting to neutralize their technique.[9] The Infinity can only be deactivated by the user, or countered by Domain Expansion or Domain Amplification.[10] Cursed tools imbued with specialized cursed techniques can also disturb[11] or dispel the Infinity.[12]

Satoru expanding the Infinity into a dome counter Jogo's lava.

The Infinity halting one of Jogo's cursed techniques.

Satoru showing Jogo the "Infinity" between them. 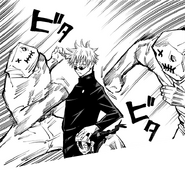 Punches thrown by Satoru's enemies are stopped before they can reach him.

Blue (蒼, Ao?) is the Cursed Technique Lapse of the Limitless, which increases the cursed energy output of the technique and generates the power to attract.[4] This is achieved by amplifying the Limitless and bringing the conceptual impossibility of negative distance into reality. This forces the surrounding space to try and fill in the gap by pulling violently toward the source of the aforementioned impossibility, creating the magnetic-like effect.[13]

Anyone who is targeted directly with blue will have their body implode and their limbs instantly crushed.[14] The user can use this effect to on themselves move at high speed[10] or use massive amounts of cursed energy to generate a large field of attraction away from themselves. Stronger variations of blue can be used to target faster moving targets or large areas, but the user can't create a wide field of attraction close to themselves.

Like the Limitless technique in general, Blue is difficult to use and requires precise manipulation of the user's cursed energy, which can cause the user to tire out easily.[13]

Juzo's limbs getting crushed as a result of getting hit by the effects of Blue directly. 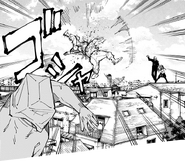 Satoru's targets colliding as a result of Blue's magnetism effect.

Satoru attempting to use Blue to blast Toji away.

Red (赫, Aka?) is the Cursed Technique Reversal of the Limitless, which reverses the effect of the strengthened technique and brings the divergence of infinity into reality[15], generating the power to repel.[4] This is achieved flowing reverse cursed energy into the power of the Limitless, creating a repelling effect rather than a magnetic one. This technique manifests as a small red orb that can unleash immense explosive force in an instant.[16][17] The energy output of Red is at least twice as much as the output of Blue.[10]

Satoru bringing the divergence of Infinity into reality and unleashing its power. 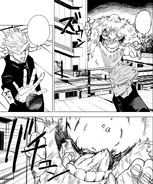 The repulsive force generated by Red blasts Satoru's opponent back a great distance.

While the Limitless technique is already complex by nature, it possesses even more advanced and elaborate techniques than Red and Blue. These techniques require intense training and practice, even for a prodigy of the Gojo Family with the Six Eyes.[20]

Hollow Technique: Purple (虚式「茈」, Kyoshiki・Murasaki?) is the fusion of both Red and Blue, a secret ability known to only a few in the Gojo Family. It represents motion and reversal, a fusion of convergence and divergence that collides both infinites to generate an imaginary mass. The effect takes the target out of reality, instantly erasing everything the technique hits without exception.[21][22]

A Limitless user is able to use spatial manipulation to teleport long distances under certain conditions.[23][24] The conditions in which they teleport themselves are unknown, but they can teleport anyone they're touching as well.[25] A drawn sorcery circle can be used to teleport other people by the user.[26]

Satoru teleporting back to his fight against Jogo with Yuji in tow.