Kirara Hoshi (, Hoshi Kirara?) is a character in the Jujutsu Kaisen series. They are a third-year student at Tokyo Jujutsu High but are currently away from school following Kinji Hakari's suspension. Kirara helps him run the Gachinko Fight Club, which hosts hand-to-hand combat between sorcerers for money.

Kirara is a young, slender person with a feminine appearance. They have long dark hair that reaches just past the back of their neck. The front of their hair is cut flat at the ends and styled into bangs that cover Kirara's forehead. There are also two flat cut strands that of hair in front of Kirara's face that frames their cheeks. The right section of Kirara's bangs are dyed a lighter color. The back of their hair has a much more stringy appearance to it and the individual hairs jut out in several directions..

Kirara has large eyes with star shaped pupils and thin eyebrows with pronounced eyelashes. They also have tally-like markings directly under both their eyes and sports four piercings around their mouth. The piercings are all circular, with two on each side of their mouth, one just below their lips and the last one on the front of the chin.

Kirara upper body outfit consists of an off-shoulder, light-colored crop top with black straps and a spiked choker around their neck. They sport loose black pants with two white belts around their lower body along with dark-heeled boots. 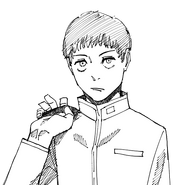 Kirara as a third-year in high school.

Kirara is mostly known for their fierce loyalty and companionship with Kinji Hakari. Like Hakari, Kirara believes in the "fever". They've nicknamed him "Kin" and have stated that they love when his fever runs "hot".

Kirara appears to enjoy having Hakari's attention as much as possible and will actively discourage it from being directed anywhere else. They didn't seem to enjoy when Hakari took an interest in Yuji and told made several comments while he was still on the phone trying to set up a meeting. Kirara told him to stop plotting out a future for Yuji as a fighter and was against working with security while Yuji gets the meeting. They also took exception to Hakari mentioning his ex-girlfriend at the end of his phone conversation, emphasizing that he shouldn't talk about her.[1]

Like they did with Hakari, Kirara likes to nickname people and was quick to give Yuji the nickname "Yu". Kirara centered their short conversation with Yuji around Hakari and their age comparison. Yuji noticed how cheerful Kirara was and they credited it to Hakari feeling "hot" again after a while.[2]

Naturally protective of Hakari, Kirara dislikes Jujutsu High and disapproves of how their conservative members have treated him. They felt no sympathy for the school after their defeat in Shibuya and feels they've always had Satoru Gojo clean up their messes.[3] Heavily mistrusting the school, Kirara was quick to perceive Megumi as allied with Jujutsu High and considered him a threat as soon as he was caught sneaking around the fight club with Panda. They also felt betrayed by Panda, who Kirara didn't feel would ever work with the school against Hakari.[4]

Megumi and Panda explained they weren't with Jujutsu High and were just asking for help, but Kirara remained suspicious and refused to cooperate at first. They even revealed Satoru Gojo had been sealed but Kirara just gave them a comically skeptical look that clearly conveyed she didn't believe them at all.[5] Kirara fought against both of them with a lot of determination to keep them away from Hakari[6] but was ultimately outsmarted by Megumi. Annoyed with Megumi, she claimed that for a first-year he wasn't very cute. However, once he released Kirara and begged for them to listen, they realized he was actually being genuine and agreed to hear him out.

Kirara even helped convince Hakari to listen to them before she heard what Megumi had to say. Their first attempt was while trying to de-escalate a fight between Hakari and Yuji. Kirara revealed that Yuji and his allies just want help, but Hakari claimed he would listen as long as Yuji remained standing. This surprised Kirara, Megumi, and Panda and left them unsure of how to respond.

Kirara can recognize the fever in people and they know what it means to Hakari. Kirara noticed that Yuji was burning with fever and pointed it out to Hakari so he couldn't deny it, asking him if Yuji was hot enough for him yet. Kirara knew this would make confirm for Hakari that Yuji has the fever and this reinforces his belief that the fever never lies. Hakari suddenly agreed to help Yuji, confusing Megumi and Panda, who had to double-check with Kirara that they got him to agree. Kirara still hates the higher-ups but they know Hakari's fever was burning the hottest while he was helping people at Jujutsu High.[7]

Overall Skill: Kirara has studied at Jujutsu High for three years and possesses a high-level understanding of jujutsu and how to apply it. Their cursed technique is a complex one, but Kirara has mastered it and made themselves an asset to Hakari, one of Jujutsu High's strongest sorcerers. Kirara applied their technique appropriately to protect the headquarters of their fight club with great efficiency. No one including Panda was able to access the monitor room where Hakari was staying unless invited.

In a two-on-one scuffle where they were fairly well prepared, Kirara was able to ultimately prevent Panda and Megumi from reaching the monitor room. Several objects on the roof were already pre-charged with cursed energy so Kirara could apply their technique and keep their opponents at bay. Megumi was able to deduce Kirara's cursed technique and eventually outwit them, but Kirara forced Megumi to make a gamble that could have just easily backfired and secured Kirara's victory. Kirara also managed to incapacitate Panda and make him a non-factor in the battle.

High Tactical Intellect: Kirara is a cerebral fighter with an intellect that can match Megumi's. When Megumi was beginning to figure out the rules of their cursed technique, Kirara quickly understood he was gathering enough information to figure it out. He used Rabbit Escape to see where the cursed technique was affecting, and Kirara recognized that he was risking attracting all the rabbits back to him and suffocating.

Megumi guessed the technique was based on the Southern Cross and Kirara accidentally confirmed it for him with the look on their face. Kirara thought Megumi knew for sure but his change in the expression made Kirara realize that he didn't actually know before seeing their reaction. Once Megumi was able to get the gist of the technique, Kirara wisely decided to immediately go on the offensive to keep them at bay. They used clever ways to attract objects to Panda and Megumi, even managing to immobilize Panda with a car.

Megumi believed that Kirara wouldn't be able to hit him with objects because they had already marked their cursed energy with Love Rendezvous. However, Kirara surprised him by removing the mark from themselves so they could mark an object with one that matches Megumi's, attracting several objects to him. Kirara admitted they were impressed Megumi figured out the conditions of Love Rendezvous, but they pointed out to him that he was too quick to believe more projectiles couldn't be sent at him.[8]