7:3 Sorcerer
Nanamin (By Gojo and Yuji)

Kento Nanami (, Nanami Kento?) is a supporting character in Jujutsu Kaisen. He was a former student of Tokyo Jujutsu High where he was an underclassman of Satoru Gojo and Suguru Geto. Nanami initially left Jujutsu High after graduating to become a salaryman, but returned four years later to continue working as a jujutsu sorcerer.

While working as a Jujutsu High sorcerer, Nanami was ranked grade 1 and operated primarily out of the Tokyo campus. With Satoru's introduction, he also became a close mentor to Yuji Itadori.

Nanami is a tall, well-built man with blonde hair styled with a neat part. Nanami has very thin eyebrows as well as small eyes that are usually covered by his signature sunglasses, which don't have arms that wrap around the ears.

Befitting a former office worker, Nanami is usually fully dressed in a business suit. His usual suit consists of a white dress shirt underneath a tan blazer with matching slacks and light shoes. Attached to his dress shirt, there is a holster that sheaths Nanami's blunt sword, hidden by the back of his blazer. He also sports a necktie that shares the same dotted pattern as the bandages around his blunt sword. 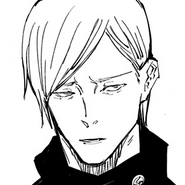 Nanami as a Jujutsu High student in 2006. 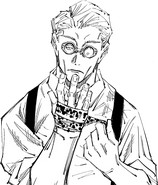 Nanami in the manga. (Gray)

Nanami is a very wise and reserved kind of man, often appearing so calm and indifferent that he comes off as stoic and aloof. He seems like the kind of person who's too serious about his work, but Nanami just knows how to separate sentimentalism from service. He's blunt and straight to the point in most conversations and doesn't care for impractical optimism[3] or questions left open to interpretation.[4]

Additionally, Nanami is very avid and quick to express his irritation, either on his face and verbally with his words. Nanami is often very impatient. He hates working overtime and is very serious about not going a single minute over what's required of him.[5]

Beneath his tough exterior, Nanami is actually quite sociable and doesn't mind intelligent conversations.[6] He's practical and overly serious to an almost comedic point on occasion as well. He claims he only became a jujutsu sorcerer because it's slightly less idiotic than being a salaryman. In the role of one of Yuji's mentors, Nanami is a very big contrast to Satoru, who is far more outspoken and easy-going.[7] Yuji and Satoru describe Nanami as "gloomy" and the former didn't believe they would get along at first.[8]

Nanami is just a normal man weighed down by the mundane day-to-day practices of life that stole his youth from him. Nanami doesn't believe age or life-threatening experience propels one into adulthood. Instead, he feels that it's the build-up of all the little inconveniences throughout life that transform people into adults.[9] He initially treated Yuji as a child because he didn't want to see him abandon his youth for the sake of being a jujutsu sorcerer. However, Yuji eventually proved himself and forced Nanami to acknowledge him.[10]

Nanami knows being a jujutsu sorcerer is a dangerous and demanding job for crazy people, and so he has a hard time respecting people in the profession. Even though Nanami and Satoru are longtime friends, the former claims he doesn't respect Satoru despite their mutual trust in one another.[11] He returned to being a sorcerer from the life of a salaryman because he never felt truly appreciated and didn't believe his work had any significant impact on anyone. In contrast, work as a sorcerer allowed him to build up small bits of appreciation from innocent people. For Nanami, this was more than enough to allow him to live without regrets.[12]

Nanami had a similar yet naturally less mature personality while he was a student at Jujutsu High. He saw missions as a burden but his negativity was always offset by his classmate Yu Haibara's extreme optimism.[13] Haibara's death affected Nanami greatly and likely played a role in his initial decision to leave life behind as a jujutsu sorcerer. One of the reasons he believes jujutsu sorcerers are trash is because they must force their comrades to accept that they must willingly sacrifice themselves. He recognizes that this lead him to "run away" from the profession, admitting that it's a more befitting phrase than suggesting he "quit".[14] Nanami wants to believe he's never been frustrated by his own uselessness, but many of his failures haunt him, such as allowing Haibara to die.[15]

Overall Skill: Nanami is a model example of what a grade 1 jujutsu sorcerer should be. Yuji and Takuma Ino both look up to Nanami for his demeanor when actively approaching a difficult situation as well as his incredible skill when it comes down to solving it. Satoru Gojo entrusted Nanami with looking after Yuji due to these traits as well[16] and it paid off well for Yuji's growth.[17] Ino, a powerful grade 2 sorcerer, approaches every tough decision with "what would Nanami do" in mind because he believes Nanami always handles things the right way.[18]

When it comes to combat ability, Nanami is capable of fighting on par with special grade cursed spirits such as Mahito. While Mahito was still in the infancy of his existence, Nanami was able to keep up in several of the exchanges. With a lack of information on Mahito's ability, Nanami suffered a direct blow to his soul but was still able to survive, something no one Mahito faced before had been able to do. Mahito himself considered Nanami to be exceptionally strong and a worthy opponent, far stronger than the average sorcerer.[19]

During the Shibuya Incident, Nanami showcased his leadership ability alongside great intellect and fighting strength. Upon learning about Satoru's sealing, Nanami was able to deduce what would be the best move for his team and helped carry out Mechamaru's rescue plan without delay. Understanding that Kiyotaka Ijichi and the managers are crucial for communication in a large-scale mission, Nanami went alone to put protocols for the operation in place while also delegating the others on another task.[20]

Following finding Ijichi injured, Nanami was quickly able to track down the culprit, Haruta Shigemo, and beat the curse user senseless without so much as suffering a scratch. This performance in particular was stunning to Nobara Kugisaki, a very capable grade 3 student. Watching Nanami fight helped her understand that he's on a completely different level and that embodies what it means to be a true grade 1 jujutsu sorcerer.[21]

Alongside Naobito and Maki Zenin, Nanami was also able to fight the special grade curse Dagon. They were able to overpower him mostly thanks to Naobito's incredible speed backed up by Nanami's support. However, not even the two grade 1 sorcerers were able to exorcise him.[22]

Trapped inside Dagon's Domain, Nanami was unable to take any offensive position whatsoever. However, he miraculously survived Dagon's endless stream of Death Swarm shikigami for over a minute, something that surprised him the domain's caster. Once Megumi arrived and nullified Dagon's automatic hit with his own Domain, Nanami focused on protecting Megumi and was easily able to dispatch any shikigami that tried to attack the student despite his injuries.[23]

Master Swordsman: Nanami mainly utilizes a blunt sword in battle and does so with incredible proficiency. Combined with his cursed technique, Nanami can cut through anything, including a blocking opponent that is using cursed energy to defend themselves. Nanami wields his blade with grace and balance, striking with extreme speed and precision with every swipe of his sword.[24]

Master Hand-to-Hand Combatant: In addition to being adept at armed combat, Nanami is an extremely capable unarmed fighter as well. His innate technique works with his fists as well as it does with his blunt sword. Nanami used this method to effortlessly overpower the curse user Haruta Shigemo. Each of Nanami's blows was incredibly devastating, a simple backhand was enough to send Shigemo flying across the room. There was never a point in the fight where Nanami was any danger fighting at close range, he delivered one bone-shattering blow after another and Shigemo would have died if not for his cursed technique.[25]

Great Tactical Intellect: Nanami's greatest assets in battle outside of his cursed technique are his astute fighting instincts and deductive reasoning skills. Both times he fought Mahito Nanami knew he was outmatched in terms of raw cursed energy, however, he survived both accounts and overwhelmed Mahito on several occasions thanks to quick thinking and masterful execution.

When Nanami was assigned Mahito's case, he was able to effectively utilize his team to track down the proper clues that eventually lead them right to Mahito. He was also able to recognize that Mahito was purposely leading them into his hideout, and decided to go alone to prevent harm from coming to the others.[26]

During their first encounter, Nanami eventually realized his cursed technique could not win against Mahito's. As a countermeasure, Nanami used the environment around them to pin Mahito down. In their second fight, Nanami quickly realized that Yuji could land attacks that actually damaged Mahito. Instantly, Nanami came up with a strategy to overwhelm Mahito together that completely worked, and if not for Mahito's sudden evolution, would have killed the special grade cursed spirit.[27] At the mercy of Mahito's Domain Expansion, Nanami was able to instantly assess his situation and what it meant for Mahito's advantage.[28]

Enhanced Durability: Nanami is incredibly durable for a human. As previously mentioned, he was able to survive being touched by Mahito's Idle Transfiguration and continued to fight and eventually escaped with his life and body intact.[29] When Shigemo fought Nanami he attempted to cut and kick right after. However, Nanami was unscathed from the slash and didn't much an inch from the curse user's kick. Shigemo compared hitting Nanami to a stone wall and said it felt like he wasn't even hitting a person.[30] Additionally, Nanami was able to survive an endless swarm of man-eating fish shikigami for over a minute and was attacked by Jogo shortly after that. He was miraculously able to survive both and was even able to continue fighting unlike Maki and Naobito who were completely incapacitated and near-death.[31]

Superior Precision & Technique: Nanami is an extremely technical fighter who plans on using his every move to exploit an opening in his opponent. His aim is always extremely precise, as he never misses his target's weak point when it's exposed by his cursed technique. Against stronger opponents, Nanami fights by breaking them down and creating constant weak points until they eventually fall. This same level of precision allows Nanami to evade his opponent's attacks with clever maneuvers. For example, by sticking his sword into a wall, Nanami was able to raise his legs high enough to avoid a ranged attack from Mahito.[32]