Keita Oe (, Ōe Keita?) is a minor character in the Jujutsu Kaisen series. He was the defendant in a murder case where he was represented by Hiromi Higuruma and unjustly found guilty.

Keita is a young man with a slim build and a fairly unintimidating appearance. He has light-colored hair and dark eyes with thin eyebrows and freckles on his cheeks. When Keita was fist charged, his hair was about mid-length, reaching to his ears. After spending time in jail, his head was shaved to a buzz cut by the time of the first trial. 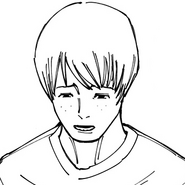 Keita before shaving his head.

Keita is a naive and unassuming person who unfortunately found himself in strange circumstances. His docile personality doesn't fit the bill of a psychopathic murderer. He's just constantly at the wrong place at the wrong time and makes himself easy to be taken advantage of. His live-in job prevented him from contacting the police when he found a murder weapon, but he earnestly meant to turn it in. He cared about his cat so he ran from the police, but they found him later with the bloody knife.

Despite the overwhelming evidence against him, Keita always remained steadfast that he was innocent. Even so, being on trial was an excruciating experience for him. Keita was crying most of the time he spoke with his lawyer but he always told the truth. Higuruma believed in him and Keita was grateful for that. However, during the second trial when Keita was branded guilty, he looked at Higuruma with disappointment.[1]