Kechizu (, Kechizu?) is an antagonist in the Jujutsu Kaisen series. He is a Cursed Womb: Death Painting and the youngest brother of Choso and Eso. He and Eso serve as the primary antagonists of the Death Painting Arc.

Kechizu appears much more like a curse than his more humanoid brothers. He is turquoise with a hunchback, claws, and two mouths with jagged teeth. He has a small face on the upper part of his head and a giant mouth just beneath it. Kechizu's eyes as well as both his mouth have his dark blood dripping from it. 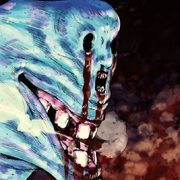 Kechizu is the least mature of the three Death Painting Womb brothers and seeks only to follow the orders of his kind. He elects to stay close to Eso whenever possible and calls out for his help whenever Kechizu finds himself in danger.

Kechizu is one of nine death painting wombs that came from a women capable of giving birth to cursed spirit children. At some point, Kechizu and his brothers were stored at Jujutsu High along with some of Sukuna's fingers.

Kechizu and his brothers, along with Sukuna's fingers, were taken from Jujutsu High by Mahito.[2][3]

Kechizu and Eso are sent on an errand to Yasohachi Bridge to retrieve one of Sukuna's fingers.[4] Once at the bridge, Kechizu enters the cursed spirit's territory and encounters Yuji Itadori, Nobara Kugisaki, and Megumi Fushiguro.[5][6] Kechizu gets into a fight with Yuji, which Kechizu tries to shoot blood at Yuji but fails. As Kechizu get a hold of Yuji, Yuji twists himself out of the way before kicking Kechizu away with an improvised dropkick. Kechizu then proclaims that Yuji is strong and that this is not fun. When Eso takes Nobara out of the territory, Kechizu decides to heads out as well after sensing his brother's presence, with Yuji following closely behind.[7]

When Kechizu and Yuji exit the spirit's territory, they notices Eso's back and quickly apologizes upon having Eso become angry at them.[8][9] As Eso forces Yuji and Nobara to run, Kechizu takes a short cut and cuts the two off. Kechizu takes this chance to hit Yuji with his blood, and Eso manages to land a blow while Nobara is distracted. When Eso activate their Decay technique, Nobara uses her own body to harm the two brothers.[10] As Kechizu is distracted by this, Yuji start to attack him. When Eso comes to Kechizu's aide, Yuji stops attacking Kechizu. Yuji then goes after Eso, while Nobara decides to attack Kechizu. Kechizu then gets up and goes after Nobara, but Nobara uses Black Flash to wound Kechizu. When Nobara turns her back on Kechizu, Kechizu tries to kill her but Nobara uses Hairpin on Kechizu to kill him. Kechizu's death is later then sensed by both of his brothers with Eso crying for his brother's demise and Choso becoming angry.[11][12]

Overall Skill Level: Kechizu is a special grade Cursed Womb: Death Painting who was incarnated by Mahito's group in order to aid in helping curses take over Japan. Despite ultimately being defeated by jujutsu students, Eso and Kechizu were entrusted with retrieving one of Sukuna's fingers and nearly killed the students attempting to do so. Kechizu's power was less powerful than that of his older brothers but he was able to land a surprise attack on Yuji.