Kawasaki City (川崎市, Kawasaki-shi?) is a city in Kanagawa Prefecture, Japan. It serves as the main setting of the Vs. Mahito Arc of the Jujutsu Kaisen series.

Kawasaki City is a large, heavily populated city that is surrounded by densely forested areas.[1] Within the city limits are numerous buildings of various size which serve as businesses, hotels, schools, and homes to its citizens. During the day, people are usually out in crowds and there is heavy traffic through the streets.[2]

In September 2018, there was a murder at Kinema Cinema that resulted in Jujutsu Sorcerers coming to investigate. The culprit, Mahito, is a Cursed Spirit who came into contact with Junpei after murdering his classmates. They bonded over their mutual disdain for humanity while Yuji and Nanami investigated both their involvement in the case.

Yuji, Nanami, and Ijichi were able to set up their base of operations within the city using a room within what appeared to be an office building.

Eventually, Nanami came into contact with Mahito. They fought in Mahito's underground lair, which was ultimately destroyed by Nanami in the climax of their first fight. At the same time, Yuji bonded with Junpei over movies and even traveled to his house for dinner.

However, their friendship ended when Nagi Yoshino was murdered by Cursed Spirits that suddenly attacked her the night after dinner. Searching for revenge, Junpei is manipulated by Mahito into attacking his own school. Yuji attempts to stop him, but they're interrupted by Mahito, who finally sacrifices Junpei's life in order to infuriate Sukuna's vessel.

Yuji clashes with Mahito, who hopes to leverage Yuji into a Binding Vow favoring Sukuna. However, Nanami rescues Yuji and together they're able to overwhelm Mahito, who escapes underground after Sukuna intervenes in the fight.

Kinema Cinema is a movie theater in Kawasaki that sometimes features older movies. Junpei often skips school to wach classic movies he enjoys there. It is also the initial crime scene of the investigation that leads Yuji, Nanami, and Junpei on a collision course with Mahito. 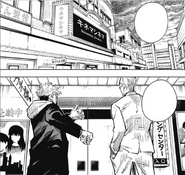 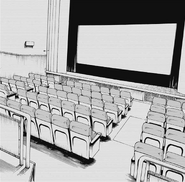 One of the theaters inside Kinema Cinema. 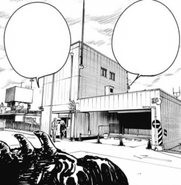 Junpei attended Satozakura High with Shota Ito and several other classmates he despised. Sotomura is also a teacher at this school. The school campus is comprised of two inter-joint connected adjacents to each other. Outside there is a courtyard and inside there are various classrooms as well as a cafeteria and a large gymnasium. 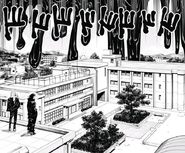 Mahito hides in the sewers beneath a streamlined body of water running through the city. The entrance to his territory is beneath a bridge built over the aforementioned river. Inside, Mahito took the spacious underground area for himself.

Mahito conducted various experiments on humans using his Cursed Technique: Idle Transfiguration to modify their souls in different ways, testing the limits of his ability. He also showed this area to Junpei when they first met. The entire part of the sewers imploded at the end of Mahito's first bout with Kento Nanami.

The entrance to the sewers beneath a bridge.

The spacious underground area Mahito claimed as his own.

The various paths of the sewers.

While investigating the deaths and disappearances by disfiguration, Nanami, Yuji, and Ijichi utilized this area as their base of operations. They utilized the office space to map out their clues and meet with one another before setting out. There was also a bathroom where Nanami was able to dress his wounds after fighting Mahito.

The building Nanami, Yuji, and Ijichi used as a base of operations.

Retrieved from "https://jujutsu-kaisen.fandom.com/wiki/Kawasaki_City?oldid=13695"
Community content is available under CC-BY-SA unless otherwise noted.