Jujutsu Kaisen (, Jujutsu Kaisen?) is the anime adaptation of Gege Akutami's Jujutsu Kaisen. It is animated by Studio MAPPA and premiered on October 2, 2020. It airs on Fridays at 25:25 (effectively, Saturdays at 1:25 a.m.) on "Super Animeism" block on MBS, TBS and their affiliates.

Hardship, regret, shame: the negative feelings that humans feel become curses that lurk in our everyday lives. Curses run rampant throughout the world, capable of leading people to terrible misfortune and even death. What's more, the curses can only be exorcised by another curse.

Yuji Itadori is a boy with tremendous physical strength, though he lives a completely ordinary high school life. One day, to save a friend who has been attacked by cursed spirits, he eats the finger of Sukuna, taking the curse into his own soul. From then on, he shares one body with the King of Curses.

Guided by the most powerful of jujutsu sorcerers, Satoru Gojo, Yuji is admitted to the Tokyo Jujutsu High School of Sorcery, an organization that exorcises the curses... and thus begins the heroic tale of a boy who became a curse to fight curses, a life from which he could never turn back.

The Jujutsu Kaisen anime adaptation was announced in the 52nd issue of Weekly Shōnen Jump, on November 25th, 2019. The manga author Gege Akutami and the main cast members appeared at Jump Festa 2020 on December 22, 2019. Toho has been confirmed to be producing the series.

On May 20th, 2020, the first official trailer for the anime was released. The preview featured scenes that adapted the first few chapters of the manga. It also revealed the animation studio adapting the material as well as a release date for the anime series: October 2020.[2]

On August 24, 2020, the 38th issue of Shonen Jump revealed a second wave of character designs for the extended cast. These characters included Maki, Panda, Toge, and Nanami. On September 3, 2020, the second trailer for the anime was released, revealing the anime's air date of October 2, 2020. On September 19, 2020, the third trailer for the anime was released, which featured the opening theme, "Kaikai Kitan" by Eve. An exclusive showing of the first episode also premiered.

At the Jump Festa '21 event, new cast members, character designs, and a key visual were revealed in anticipation for the upcoming second cour of the anime. Following the conclusion of the first cour on December 25th, the anime went on a hiatus until January 16, 2021. The second cour adapts the Kyoto Goodwill Event Arc and the newly introduced cast of characters are from Kyoto Jujutsu High. Who-ya Extended will perform the new opening theme song "VIVID VICE" and Cö shu Nie will perform the new ending theme song "give it back."[3]

The anime's first season concluded the week of March 27, 2021. On that exact day, a movie prequel was announced. It adapted Jujutsu Kaisen 0: Jujutsu High.

Rebroadcast Key Visual for the Vs. Mahito Arc.

The anime announcement artwork featured on the cover WSJ Issue 52-2019.

Inside Jump issue 38-2020 revealing the second round of designs. 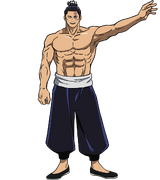 Megumi tracks down the Cursed Object.

Sasaki and Iguchi are attacked by Curses.

Curses attempting to absorb Yuji's friends and the Sukuna finger.

Yuji rushes to save his friends.

Gojo introduces himself to Yuji.

The third member of the first years.

The Girl of Steel.
PV2

Sukuna in his Innate Domain.

Yuji fighting for his life.