Jogo (, Jōgo?) is a major antagonist in the Jujutsu Kaisen series. He was an unregistered special grade cursed spirit aligned with Mahito, Hanami, and Dagon. Jogo believed curses were the true humans and desired a world where his kind dominated the earth.

Jogo had a humanoid shape but his physical appearance was distinctly that of a cursed spirit. Jogo carried himself like an elderly man. He was relatively short compared to Mahito and Hanami, had a hunchback posture, and carried a cane with him. As described by Yuji Itadori, Jogo's head was shaped like a mountain (Mt. Fuji), specifically a volcano.[2]

Jogo had pale gray skin but the top of his head faded into a brown color where the volcanic opening was. He had a single cycloptic eye, two openings on the sides of his head that served as ears, and black teeth. Jogo normally plugged his ears with large corks but they would fly out if he lost his temper, which caused his head to erupt with flames.

Jogo wore an all-black outfit that consisted of a loose shirt with quarter-length sleeves with matching pants and shoes. He wore his signature green spotted cape over that along with a white scarf. 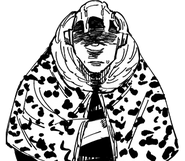 Jogo in the manga (gray).

Jogo was defined by his pride as a cursed spirit. He was an intelligent being who was resolute in all his beliefs, willing to give his life so long as his goals were achieved in the long run. On a personal level, Jogo was always ill-tempered, irritable, and very arrogant.

Jogo believed that cursed spirits are the true humans and they are the ones who will inherit the earth. He saw humans as creatures made of lies pretending to hide their true nature with the positive emotions they show. Curses are made up of negative emotions that Jogo views as pure intent, and so he thinks that curses born from such truth are the purest forms of humans and the fake ones should be eliminated. In order to achieve this Jogo and his partners agreed to ally themselves with the curse user Pseudo-Geto.[3]

Geto shared his plans to deal with Satoru Gojo using Prison Realm but Jogo arrogantly attempted to challenge Satoru himself and take Prison Realm as a reward. Geto warned Jogo several times that Satoru couldn't be beaten but this only excited him. With his excitement rising, Jogo's heat increased as well, killing every bystander in the meeting place with a smile on his face.[4] Jogo prided himself on strength and discredited all humans, which lead him to severely underestimate Satoru, who beat Jogo handily. He only took Satoru half-seriously and thought that if he failed it wouldn't be a big deal anyway. However, Jogo was forced to admit to himself that Geto was right, but Jogo's pride as a cursed spirit wouldn't allow him to ignore Satoru emphasizing the difference in strength. Satoru calling Jogo weak made the curse lose his temper completely.[5][6]

Unlike with humans, Jogo gets along with his fellow cursed spirits quite well. He viewed Dagon and Hanami as close friends and his dynamic with Mahito wasn't bad either. While Jogo liked to sit around and smoke in his downtime, Mahito would often intrude with his happy-go-lucky personality.

When Jogo and Mahito discussed following Geto's plan to recruit Sukuna, they agreed Sukuna was so valuable that they should revive him even if they were all eliminated in the process. This made Jogo smile because he was perfectly content with not being there as long as curses emerge as the true humans of the earth in the end.[7]

In Shibuya, Jogo held a grudge against Satoru and tried to torment him at every chance he got. He was confident in Geto's plan and took pleasure with slaughtering humans as collateral to help stifle Satoru.[8] He was consistently smiling and taunting Satoru until the world's strongest sorcerer got aggressive, exorcised Hanami and forced Jogo to run away. Frightened and frustrated, Jogo threatened Choso while running away because the Death Painting wasn't helping him enough.[9]

Later on, Jogo clashed with Choso about taking revenge on Yuji. Choso wanted to kill him but Jogo argued they needed to turn him into Sukuna. When Choso said he didn't care, this immediately irritated Jogo. Mahito tried to escalate the situation by agreeing he wanted to kill Yuji too, annoying Jogo because they had agreed in the past to revive him no matter what. Jogo stated that curses don't fear death and walk sincerely towards their goal because they have a drive that humans don't. Mahito argued it was okay for curses to be inconsistent and decided to turn it into a game since he had no intention of fighting Jogo. Jogo believed it was foolish to engage in a game but was forced to participate when Mahito and Choso ran off to find Yuji.[10][11]

When Dagon perished, Jogo found his remains and took a moment to mourn him despite being surrounded by sorcerers. Jogo was visibly saddened by the loss of his ally and told Dagon to leave the rest of him. He added that their souls will continue to circulate regardless of humanity and promised to meet Dagon again in the wastelands a hundred years in the future. Vengeful and angry, Jogo immediately took revenge for Dagon, burning Naobito, Nanami, and Maki alive one after the other.[12]

Jogo eventually found Yuji and didn't hesitate to feed him every finger in his possession. Once Sukuna gained control of the vessel, Jogo recognized his presence was even worse than Satoru's because it was overwhelmingly evil. Jogo didn't ask Sukuna for any favors and only told him to try and take over Yuji's permanently. Sukuna refused and revealed he had his own plans, confusing and surprising Jogo. As an appreciation for the fingers, Sukuna agreed to fight Jogo and work with him if he lost. Jogo willingly engaged Sukuna with the hopes of recruiting him knowing full well he could die in the process.[13]

Jogo was heavily outclassed by Sukuna and was once again forced to realize his own weakness, frustrating him throughout the fight. He didn't even bother using Domain Expansion because he knew Sukuna's would win in a domain battle due to his experience with Satoru. Sukuna noticed Jogo's diminished confidence and said he had spoken like a true loser.[14]

Sukuna believed Jogo was foolish for wanting to take the place of humans. He told Jogo that flocking together and comparing yourself to those around you stunts true growth and that Jogo should've burned everything he desired to a cinder without a second thought.

Jogo accepted that Sukuna was right and that he probably lacked the hunger to reach the heights of Satoru Gojo. However, Sukuna admitted their fight was fun, stating that Jogo stood out amongst those he's fought in the last thousand years, encouraging the cursed spirit to stand proud because he was strong. This acknowledgment of his strength made Jogo so proud that he shed tears for the first time, completely unaware he was even capable of crying.[15]

In his final moments, Jogo visualized Dagon and Hanami. He apologized for allowing them to all perish but they agreed to put their trust in Mahito, who Jogo has always propped up as their leader. Jogo didn't think they would be reborn the same as before, but he still anticipated the day he and his friends meet again because he always believed they were the true humans.[16]

Overall Skill: Jogo was one of several unregistered special grades that appeared around 2018. He was born of humanity's fear and negative association with volcanoes and other fire-related natural disasters. This resulted in a highly intelligent cursed spirit with massive levels of cursed energy even for a special grade. Kenjaku generously placed Jogo in the same vein of strength as eight or nine of Sukuna's fingers. While Jogo proved no match for overwhelming powers like Satoru Gojo and Sukuna, he still far outclassed even the most talented sorcerers and other special grade curses.

Non-sorcerers would combust in Jogo's very presence if he simply activated his cursed technique.[17] Jujutsu sorcerers who entered his domain would suffer a similar fate[18]. In Shibuya, the Zenin Team and Nanami considered Jogo to be leagues and bounds more powerful than fully realized Dagon, who they had just struggled mightily against. Jogo defeated Nanami, Maki, and Naobito within just a few moments using his superior speed and power.[19] This charred half of Nanami's body, gave Maki permanent scars, and killed the head of the Zenin clan.

Despite not being able to match up against Sukuna with fifteen fingers absorbed, Jogo's strength was still acknowledged by the King of curses. Sukuna admitted that Jogo's maximum technique might have hurt him had it landed.[20] Throughout all the opponents Sukuna have faced over a thousand years, Jogo has stood out to him as one of the stronger ones, a massive endorsement of his overall power. Kenjaku would've liked to have absorbed Jogo with Cursed Spirit Manipulation and acquired his technique.[21]

Highly Enhanced Speed & Reflexes: Jogo was incredibly fast, able to get past several grade 1 sorcerers without them noticing. He blitzed Nanami and Maki one after another, setting them both ablaze before they could react. Jogo even outmenuevered Naobito, one of the fastest jujutsu sorcerers, and burnt him alive right after.[19]

Highly Enhanced Durability: Jogo was always durable and not easily exorcised. He took a beating from Satoru Gojo himself and although he was ultimately dominated, Jogo survived hits from several of Satoru's cursed techniques, including Cursed Technique Reversal: Red. He was also able to sustain himself through a prolonged fight with Sukuna, able to recover from every physical strike he was hit with.