Fumi (ふみ, Fumi?) is a minor character in the Jujutsu Kaisen series. She is Nobara's childhood friend.

Fumi is a young firl with long, dark hair which she ties into a high ponytail. When she was younger, her hair was shorter and wore her hair in two loose ponytails.

As a child, Fumi wore a turtleneck and a dress, along with a light, short-sleeved shirt. When Nobara was getting onto the train to move to Tokyo, Fumi wore her school uniform. 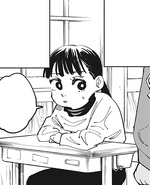 Fumi as a child.

In contrast to the more brash Nobara, Fumi appeared is a quiet and shy girl. She is very caring such as cheering Nobara on when she was losing at Smash Bros, and being willing to trade backpacks with her.

In a flashback, Fumi is watching Nobara playing Smash Bros. and cheers her on.[1] At their elementary school, Nobara asks Fumi to trade backpacks who was very willing to do so. However, Fumi ended up getting her backpack back which made Nobara upset who kicked her backpack. After this day, Nobara would go to Fumi's house and play Smash Bros. with her father.[2]

Nobara told Fumi that she found a secret base which she says that she'll be living there. Upon arriving at the "secret base", Fumi realized it was someone's house. When Saori moved out of her house, Nobara started crying which resulted in Fumi crying as well. While at the train where Nobara is about to leave for Tokyo and tells Fumi to find a way out as well. Before getting onto the train, Nobara tells Fumi that the next time they meet make sure that all three of them are there. Which tears appear as Fumi nods and agrees to this.[3]

As an ordinary human, Fumi doesn't possess any additional abilities.