Curtain (帳, Tobari?) (aka "tobari," "barrier", "tobari curtain") is a technique that separates an area from the rest of space. Barriers are mostly used by Shamans to hide their activities from the world by rendering the inside of the area invisible to the outside, obscuring any activity, so that civilians do not witness the curses or shamans.[1]

Creating a curtain requires a minimum level of skill that many powerful shamans allegedly do not possess; however, the difficulty of the technique varies depending on the complexity of the requisite curtain, and as such other less skilled shaman may be able to create less effective barriers.[2] Skilled shaman may be able to implement very conditions to their curtain.[3]

The full method of deploying a curtain is unclear, but the user is required to utter the an iteration of one of the following phrases:

"That which frightens more than darkness itself... that which is darker than black... purify this defilement."[4]

"Emerge from the darkness, blacker than darkness. Purify that which is impure."[5]

Conditions can be used to increase or decrease a curtain's effectiveness or to specifically cater to a particular goal. For example, Juzo creates a barrier that keeps out only Satoru Gojo. These conditions typically can only be made regarding things that possess cursed energy. For example, a curtain would not be able to be created with the condition that cell phone reception is blocked; however, this may result as a side effect of its conditions.[6] These conditions can be commissioned, implying that some level of preparation may be necessary for more complex curtains, but this is unclear.[7]

Curtains may be created and imbued in objects which then maintain that barrier until destroyed.[10] 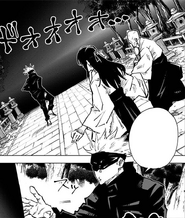 Retrieved from "https://jujutsu-kaisen.fandom.com/wiki/Curtain?oldid=7258"
Community content is available under CC-BY-SA unless otherwise noted.