Choso (, Chōsō?) is a supporting character in the Jujutsu Kaisen series. He and his two brothers, Kechizu and Eso are incarnated Cursed Womb: Death Paintings No. 1-3. Choso initially sided with Kenjaku's alliance with Mahito until he discovered one of the curse user's past identities was the cruel father of the Death Painting Wombs, Noritoshi Kamo. He also found out that Yuji Itadori is another relative of Kenjaku's and has aligned himself with his new "younger brother".

As a Death Painting Womb, Choso is a half-human, half-cursed spirit who has a flesh and blood body that is fully visible even to non-sorcerers. His appearance is predominantly that of a human man with long black stringy hair tied into two high ponytails that jut upward and outward. Choso has small dark purple eyes with slightly thin eyebrows and a blood mark that extends from both sides of his face across the bridge of his nose. He can make this mark bleed at will in order to produce ammunition for his cursed technique, and the mark changes shape if he uses Flowing Red Scale.

As far as clothing, Choso wears a loose, light tan robe that covers his torso, arms, and legs. It's worn underneath a purple gi-like vest that covers his torso in a "v" shape and has a bottom section that extends to Choso'ss waist and groin area. He also always sports a round scarf around his neck that matches his gi and brown boots.

In the anime, Choso has violet eyeshadow around his eyes and his hair is a light brown color. 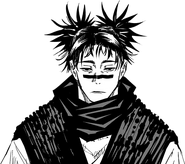 Choso in the manga (gray).

Choso is a very calm and reserved person who's fairly quiet and tends to fade into the background of social groups. He normally has a bored expression on his face and appears aloof and completely disassociated in most situations.

Unlike the vast majority of cursed spirits, Choso doesn't have an inherent desire to attack people and doesn't even harbor any disdain toward jujutsu sorcerers.[2] He's not cruel or vicious in any way and generally doesn't speak often unless it has to do with his family. In fact, Choso loved his human mother and the sorcerer who toyed with him was the only one to earn his hatred.[3]

Despite appearing to be a very disassociative person, Choso is very attached and protective of his brothers. Upon being incarnated, Choso told his two brothers that three of them lived only for one another and that they were all one.[4]

With a bored expression on his face, Choso was going through the motions of a simple board game with Mahito and Pseudo-Geto when he learned Eso and Kechizu had perished, deeply upsetting him.[5] He agreed to fight alongside Mahito and Geto but ultimately only pursued the goal of avenging his brothers during the Shibuya Incident.

Even during the fight against Satoru Gojo, Choso barely committed himself to attacking Gojo and stayed far back out of his range the entire time, upsetting Jogo. He also clashed with Jogo's more abrasive personality over keeping Yuji alive to revive Sukuna because Choso wanted to kill the vessel outright to avenge his siblings.

Choso earned the opportunity to take revenge on Yuji but could feel his impending death right before dealing the killing blow. It's a side effect of his composition as a Death Painting Womb and of his cursed technique. Choso can feel the death of his brothers and felt the same intense sensation from Yuji's impending death as he did from Eso and Kechizu's.

Once Choso realized that Noritoshi Kamo survived by moving from body to body, he surmised that Yuji must be his relative through that connection. Choso was quick to deem him one of his younger brothers and align himself with him. He devoted all his strength to protect Yuji for the remainder of their time in Shibuya and focused his vengeance on Kenjaku for manipulating him into hurting his little brother.[6] [7]

Choso takes pride in being the oldest of ten siblings and his values and who he is as a person are all related to this. Due to his family values and unconditional love for his siblings, Choso can't understand someone like Naoya Zenin. Naoya hates all of his older brothers because they are weaker than him. Choso argues that older siblings either present the road to travel or the one to avoid. He believes perhaps someone like Naoya is only strong because his brothers are weak. Unlike Naoya, Choso didn't have an older brother to show him the way so he always stumbled and made mistakes. Even so, Choso stands tall and walks the path ahead of his younger brother's and it is from this dedication that he draws strength.[8]

Overall Skill: Choso is ranked special grade and is exceptionally powerful even by cursed spirit standards. While still existing as a cursed object, Choso was intelligent and self-aware, allowing him to hone his cursed techniques for 150 years.[9] By the time he was incarnated, Choso had already mastered Blood Manipulation to a level that far surpasses the current Noritoshi Kamo.[10]

During his minimal role in the battle to seal Satoru Gojo, Choso showcased a host of different Blood Manipulation techniques. None of them could breach Gojo's Infinity, but they were also used to slaughter tons of non-sorcerers to put him at a further disadvantage.[11][12][13][14]

In addition to jujutsu, Choso also excels in taijutsu, capable of standing up against a master martial artist like Yuji. Using his whit alongside a host of techniques to overcome Yuji's strength, Choso overcame him to the degree that he could have ended his life.[15] This is even after Mechamaru helped the Jujutsu High student put the blood manipulator in a situation where he couldn't control it outside his body.[16]

Despite exhausting himself during the Shibuya Incident, Choso continued to fight on and clashed with Kenjaku in order to help Yuji.[17] Although Kenjaku escaped mostly unscathed, his partner Uraume was hit by Choso's Piercing Blood technique and poisoned.[18] A sorcerer of Uraume's caliber was strong enough to completely immobilize all Yuji's allies. Uraume was able to freeze Choso as well, but after Yuki Tsukumo rescued everyone from Uraume's Icefall, enough time had passed for Choso's poison to take effect.[19]

Naoya Zenin, a special grade 1 sorcerer and inheritor of the former head of the Zenin Family's Projection Sorcery, is another close combat fighter that Choso battled and defeated. Choso was quickly able to deduce that Naoya was a speed type and there was a trick to it hidden within his cursed technique.[20]

While Choso was still outclassed by Naoya's speed and suffered a one-sided beating at the beginning of their fight, he managed to tough it out thanks to his physical endurance and unwavering willingness to defend his little brother. Although Naoya managed to injure the Death Painting Womb and slice him open, Choso turned his wound into an advantage and once again overcame Naoya by using different Blood Manipulation moves in a variety of clever ways.[21]

High Tactical Intellect: Choso has existed for one-hundred and fifty years and one of his greatest weapons is his incredible level of wisdom. His mastery over Blood Manipulation has allowed Choso the freedom to experiment and utilize its abilities in ways that are all unique to him. He applies the technique in many different ways during battle to swing the tide in his favor.

When the ability to manipulate blood outside his body was stripped from him, Choso instinctively focused on controlling the blood inside him in spite of his minimal battle experience. Choso knew he couldn't physically compete with Yuji, so he used Flowing Red Scale: Stack to even the odds. Although Yuji began to gain the upper hand in close combat, Choso hid some blood in his hand to ensure it didn't dissolve and shot a Blood Meteorite through his robe to hide the projectile that successfully pierced Yuji's liver.[22]

After being on the receiving end of three of Yuji's superpowered punches, Choso quickly assessed the heavy damaged he received and determined that he was a severe threat. He risked thrombosis and hardened blood within his body and used it to block what could've been Yuji's fight-ending blow. Yuji believed that Choso wouldn't think he would use his left hand because he injured it early in the fight. However, not only did Choso predict he would use his left hand, but he also correctly foresaw exactly where he would try to land that punch. Choso hardened his blood to protect his body in the perfect spot and was able to defeat Yuji as a direct result of his tactical prowess.[23]

When faced with the responsibility of protecting Yuji against an impossible opponent like Yuta Okkotsu, Choso was able to form a solid plan in a very short amount of time. Although Choso was ultimately thwarted, he wanted to block off Yuta and allow Yuji to escape while also dealing with Noaya so the speed-type couldn't give chase.[24]

Once Choso realized he was at a disadvantage, he focused Flowing Red Scale: Stack in his eyes to raise his dynamic visual acuity in order to track Naoya's speed.[25] He also noticed that Naoya was familiar with Blood Manipulation and got the Zenin clan sorcerer to walk right into Supernova, a Choso original Naoya's clan would have no knowledge of.[26]

Choso's intelligence also extends to practical situations that don't include combat. When faced with the obstacle of getting past Tengen's concealing barrier, Choso had the clever of copying how Mahito invaded during the Goodwill Event. The cursed warehouse storing cursed objects such as the Death Painting Womb lies somewhere in between Tengen's doors and the Tombs of the Star. By tracking the presence of his six brothers, Choso can guess the one correct door out of thousands to breach Tengen's barrier.[27]

Master Hand-to-Hand Combat: As previously stated, Choso excels in unarmed combat and was able to overpower two powerful combatants that fight exclusively at close range, Yuji and Naoya. Enhanced by his cursed techniques, Choso's martial arts is a threat that can even contend with the likes of Yuji. Enhanced by Blood manipulation, Choso was able to parry and counter Yuji's martial arts with his own.[28][29]

Advanced Endurance: As noted by Naoya Zenin, Choso is exceptionally tough.[30] He was able to withstand multiple hits from Yuji, who possesses superhuman strength enhanced with cursed energy and masterful precision in his martial arts technique. The Death Painting Womb was also on the receiving end of consecutive blows hits from Noaya that carried the momentum from him moving at blistering speeds.[31] In both hard-fought battles, Choso was able to endure and come out on top. Choso continued to press on even after his lengthy duel with Yuji as a testament to his stamina as well.[32]