Charles Bernard (シャルル・ベルナール, Sharuru Berunāru?) is a character in the Jujutsu Kaisen series. He is an aspiring mangaka who was aggressively pursuing his goals until he was unwillingly forced to participate in the Culling Game.

Charles is a young man of French descent who the locals can tell is foreign. His hair is a steel blue color and Charles wears his hair in a unique disheveled fashion. The back of his hair is heavily ruffled and the right side of his bangs is lifted back above his head. He also has thick blue eyebrows that splinter at the ends and his eyes are of a similar blue color.[1]

Charles wears a dark turtleneck sweater with a tan neck neckline and a v-shaped design across the chest. He wears it underneath a light-colored blazer and sports dark pants with simple shoes as well. 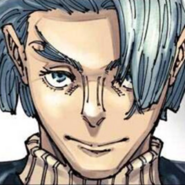 Charles dislikes any sort of criticism of his art and lashes out in an immature fashion in response. When Charles submitted his series to a publisher, he was personally insulted when he received legitimate advice on where he could improve his art. From the beginning of the meeting, Charles was overconfident and believed it was sure to be the beginning of his dream. Instead of taking the criticism as constructive and accepting the rejection, Charles assaulted the publishing agent.

The aftermath of the Shibuya Incident essentially ruined any practical path to Charles becoming a mangaka. Manga stopped being produced and Charles doesn't think the world will ever recover from the influx of curses ravaging Tokyo. He's forced to participate in the Culling Game and can't find a good reason to fight to the death. Charles wants to be like heroes from manga and fight for something positive. Charles selfishly asked Kinji Hakari to give him a reason to kill the latter. Hakari obliged and insulted Charles's dreams, making Charles cry and inspiring him to attack.[2]

Overall Skill: Charles was a normal person before the Culling Game and was unknowingly given the capacity to develop a cursed technique by Kenjaku. Since developing his technique, Charles has become a proficient jujutsu user and spearman. He's capable of forcing Kinji Hakari to take him seriously in a fight despite never gaining much of an advantage over him.