Black Flash (, Kokusen?) is a phenomenon in jujutsu that greatly amplifies the user's physical strike when cursed energy is applied to it within one-millionth of a second.

Black Flash is a distortion in space that occurs when cursed energy is applied within 0.000001 seconds of a physical hit. When a sorcerer is able to achieve this, their cursed energy flashes black, and the destructive power of their strike is equal to a normal hit to the power of 2.5.

Unleashing Black Flash requires incredible concentration and no jujutsu sorcerer is capable of using doing so at will, not even Satoru Gojo. It does not occur randomly and requires immense skill and combat potential to pull off. While Yuji is thought to be blessed by the sparks of black due to his potential, the same goes for Mahito because the sparks do not choose who to bless.[1]

Jujutsu users who manage to unleash Black Flash immediately gain an immeasurably higher understanding of the essence of cursed energy when compared to someone who has never used it. Anyone who succeeds in landing Black Flash will temporarily enter a state of increased cursed energy awareness, where the mental process of manipulating cursed energy becomes as simple as breathing for them.[2] This leads to a greatly increased performance in combat, allowing the user to operate at 120% of their maximum potential.[3]

Nanami believes that using Black Flash consecutive times isn't anything to celebrate. After unleashing Black Flash more than once, doing so repeatedly becomes a much easier task. Nanami compares using Black Flash to being "in the zone", the state of elite focus and feeling of being at the center of everything that professional athletes experience while in a game.

Nanami's record four consecutive Black Flashes were against cursed spirits during the Night Parade of a Hundred Demons in Kyoto.[4] Despite holding this record for over a year Nanami accredits it to getting lucky.[5]

Yuji's first Black Flash dealt a great deal of damage to Hanami. While "in the zone" Yuji was able to land a rush of four Black Flashes that completely overpowered the special grade curse. This rush tied Kento Nanami's record of four consecutive Black Flash strikes.[7]

While fighting two-on-two against Eso & Kechizu, Yuji and Nobara both used Black Flash together to defeat the Death Paintings. Yuji's punch destroyed Eso's arm entirely, and so quickly that the special grade couldn't even react. It was here where Yuji proved to be the man chosen by the sparks of black.[8]

Yuji was able to utilize Black Flash multiple times in his final battle against Mahito. Once again fighting alongside Todo, Yuji capitalized on multiple switching opportunities presented by Boogie Woogie to land direct hits on Mahito's soul using Black Flash.[9][10] He was able to defeat Mahito's final form by hitting him with a Black Flash imbued with maximum cursed energy.[11] 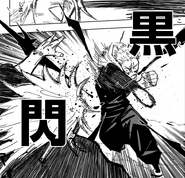 During Nobara Kugisaki and Yuji Itadori's battle against Eso and Kechizu, both Nobara and Yuji managed to land a dual blow of Black Flashes to the curse-human hybrids.

After emotionally breaking Yuji Itadori by near fatally injuring Nobara Kugisaki, Mahito landed a Black Flash strike on the unprepared Yuji, launching the boy across Shibuya Station and overwhelming him with numerous attacks. He once again used it against Aoi Todo after weakening him with Idle Transfiguration. 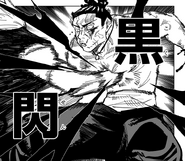 Mahito's second use of Black Flash against Todo

During the fight Yuji and Aoi had against Mahito in Shibuya, he managed to perform a Black Flash by kicking Mahito, not wanting to be left behind his "brother's" growth. However, this was unable to do any lasting damage to the cursed spirit, due to his soul being unaffected by the attack.

Aoi catches up to the other fighters during the battle.