Aoi Todo (, Tōdō Aoi?) is a character in Jujutsu Kaisen. He is a third-year at Kyoto Magic Technical College.

Aoi is a tall and muscular man with a scar reaching from his hairline to his cheek on the left side of his face. He has shoulder length black hair tied in a spiky ponytail.

As a child, Aoi had a shaved head and wore a black tang top, black shorts that have a line running down the side, and a backpack. 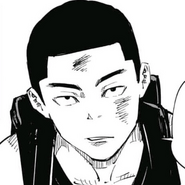 Aoi Todo as a child

When Aoi was in grade school, Aoi had met a shaman who asks what his type of women after he has just defeat a high school student. This event causes Aoi to feel that this meeting will cure his boredom.

Aoi and Mai came to Tokyo with principal Yoshinobu, in order to size up the opposition for the Kyoto Goodwill Event. Aoi confront Megumi and asks what type of girl he likes. As Megumi wonders why he should answer him, Aoi fully introduces himself and explains why he asks that question. When Megumi gives Aoi an answer, Aoi calls him boring and attacks him. When Megumi brings up about not using his cursed power against spirits at one points, Aoi corrects Megumi on what really happens which causes Megumi to think that Aoi is a monster.[2]

As Megumi prepares to fight Aoi at long range, Aoi easily closes the distant and slams Megumi to the ground. When Megumi tries to get away, Aoi easily grabs a hold of Megumi and slams him through some structures. Aoi is suddenly restrained by Megumi's shikigami's, which Aoi says that he doesn't feel any power from Megumi's technique. When both of them start to get serious, Toge and Panda arrive and stops Aoi from getting serious. Aoi and Panda start to talk, and Aoi decides to stop fighting and leave. Aoi then meets up with Mai and says that they are leaving much to Mai's protest. Aoi leaves with Mai to go attend a celebrity meet. Later Aoi attends the celebrity meet and get to shake hands with the celebrity he wanted to meet.[3]

A month later, Aoi arrives in Tokyo along with the other Kyoto students and staff. Aoi is their when Gojo reveals that Yuji is alive to everyone, and is given a souvenir from Gojo's trip. Aoi then attends the pre-event meeting along with the other Kyoto students, and gets annoyed when Yoshinobu instruct them to kill Yuji. When Aoi is stopped from leaving, Aoi threatens them all and still leaves.

When the Event begins, Aoi encounters the Tokyo group and splits them apart. Aoi then starts to fight Yuji and manages to pound him into the ground. Aoi thinks he has won and starts to walk away, but is stop when Yuji get back up. Aoi gets excited by this and asks what Yuji name is along with what is Yuji's type of woman. Yuji introduces himself and gives an answer that Aoi agrees with, which Aoi thinks about a school life that they didn't have and calls Yuji his best friend. When Yuji is surrounded by the Kyoto students, Aoi saves him and forces the students to leave.

Aoi and Yuji then continue fighting, which Aoi figures out how Yuji is able to adapt to his surrounds. Aoi also figures out that Yuji's cursed power has a habit of lagging and says that that is wrong. Aoi tells Yuji that if he wants to get stronger then he will have to stop having his cursed power lag, which Yuji agrees with. As both of the continue to fight, Aoi notices that Yuji is still growing as the fight continues. Aoi then explains how cursed power flows in the body, which Aoi manages to understand. Both of then continue to fight, were Aoi decides to help Yuji grow stronger.

When intruders arrive at the site of the event and seal it off, Aoi and Yuji save Megumi and Maki from Hanami. After Aoi hands Maki and Megumi over to Panda to get them to a save location, Aoi watches Yuji fight Hanami until he can use Kokusen. Aoi notices that Yuji is to angered to fight properly, so Aoi slaps Yuji and tells him that he need to calm down. After Yuji manages to use Kokusen on Hanami, Aoi explains to Yuji that he now know what his cursed energy is capable of. Aoi then joins Yuji to face off against Hanami. As Aoi and Yuji face Hanami, they learn that Hanami's cursed power is capable of manifesting plants. Aoi and Yuji continuously dodge Hanami's attacks, which Aoi decides to use his technique.

Aoi then thinks about everything that Hanami has done and prepares to charge but Aoi is grabs by Hanami's power. As Hanami prepares to kill Aoi while fight Yuji, Aoi uses his power to switch place with Hanami. When Hanami figures out what Aoi's technique is capable of, Aoi explains what his technique is capable of. As Aoi and Yuji charge towards Hanami, Aoi explains how he activates his technique. Aoi then uses his technique to have Yuji continuously attack Hanami with Kokusen. When Hanami figures out their strategy, Aoi tricks Hanami so that Yuji can land another Kokusen. Aoi and Yuji continue to fight Hanami, after they figure that the continuous use of Kokusen has harmed Hanami. When Hanami launches an technique at the two, Aoi uses his technique to switch Yuji and Hanami. As Aoi goes to defend himself with cursed power, but figures that that will work against him and releases his cursed power. As Aoi comes out unharmed, Aoi and Yuji continue to fight Hanami. Once they reach a certain spot, Aoi uses his technique to switch Yuji with a cursed tool. Aoi then uses the cursed tool to harm Hanami. As Hanami goes to counter, Aoi manages to dodge the counter. When Yuji returns to the fight, Aoi tells Yuji to stay away since Hanami is preparing a technique.

Once Gojo arrives at the battle site and Hanami decides to retreat, Aoi stops Yuji from heading after Hanami because Gojo launches a technique at Hanami. After Gojo technique lands a hit, Aoi explains how the technique is so destructive that they don't know if the cursed spirit is exorcised. After the days event is cancelled, Aoi continues to chase Yuji around.

Days later Aoi along with Mei Mei meet with principal Yoshinobu, and nominates Megumi, Nobara, and Yuji to be promoted to grade 1 shamans. Afterwards Aoi plays a game of tabletop tennis with Mei Mei, he voices how he will be about to accompany Yuji on more mission for his promotion. Mei Mei tells him that the one that nominated the person is not able to accompany the nominee much to Aoi disappointed.

Strength: He possesses a superhuman strength by destroying walls, floor and ceiling without problems, being able to fling a person with a blow.

Durability: He's capable of supporting Itadori's punches and kickswith its curse power increasing the power of the impact, suffering little damage and fighting back without problem.

Speed and Reflex: Even with his weight and size he possesses a great speed, appearing behind Megumi in an instant without him noticing.

Cursed Technique: Aoi's power is called Boogie Woogie (, Bugi Ugi?). Within a specified range, Aoi is able to switch the position of anything containing at least a certain amount of cursed energy, be it a living being, a cursed corpse or a cursed tool, simply by clapping his hands together.

Retrieved from "https://jujutsu-kaisen.fandom.com/wiki/Aoi_Todo?oldid=7823"
Community content is available under CC-BY-SA unless otherwise noted.